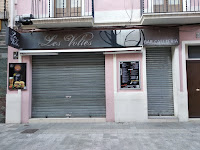 On Saturday 14 March 2020 all bars and restaurants in Catalonia closed. This was the first official act in response to the Coronavirus pandemic. I had spoken to my friend Josep early that morning by phone and we had agreed to meet at my usual cafe – the one I went to every day. But when I passed by while walking the dog, they were just closing up and pulling down the shutter. I called Josep and he said it looked like bars everywhere were closing. It seemed that the government had issued the directive just a little earlier. Surprise!
That was the beginning of a series of measures the Catalan and Spanish governments have taken to prevent the spread of the Coronavirus. There have been many but this is the only date I have marked because I keep an account of all my expenses, and all of a sudden my daily coffee and croissant disappeared from the spreadsheet. Having my breakfast out was a habit I acquired after moving to Figueres – my one small daily pleasure. Before that it was occasional, but at some point I retired all my coffee pots to upper shelves and headed out. 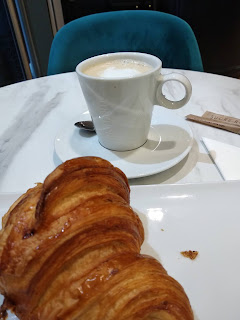 That same morning I ran off to the supermarket and bought ground coffee, soy milk, and bread for toasting, so I could make my breakfast at home. Little did I know that toilet paper was about to become an issue. But my immediate problem was foam. The foam at the top of my coffee, sprinkled with a little bit of powdered chocolate, is the best part, it is like dessert at the end of breakfast. At home I had two mocha pots, three French press coffee makers of various sizes, but no espresso machine and no way to make foam.
A day or two later we were all told to stay home. Only those who worked in essential businesses could go to work. Those included health care workers, grocery stores, pharmacies, veterinary services, newsstands, garbage collection, and tobacco shops. (Yes, really.) Hairdressers were originally on the list but they soon got removed. You could go out if you needed one of these essential services, otherwise you were to stay at home. You could also go out to walk your dog. After a couple of weeks the joke was that you could rent your dog out to people who were desperate to get out. Or maybe that wasn’t a joke. I received no offers.
You couldn’t walk your dog any old where and you couldn’t do it for great lengths of time. That same Josep was stopped one day, early on, by a patrol car. Where are you going? they asked. He pointed up ahead to where his apartment building was and said he was going home. Where have you been? they asked. He told them he was coming from the park that was just behind him. Ah, they said. But you’ve been to a lot more places than that. We’ve seen you all over Figueres this morning. You are not allowed to go more than 50 meters with the dog.
Fifty meters? How far is that? I went to Google to measure it on their map. It seemed I was only allowed to walk Cupcake for two blocks, then I would have to come back. Some rules are meant to be broken.
I figured I would never be bothered. A little old lady with grey hair and a small dog, no police would bother with me when there are all these young people going here and there with no dog and no shopping cart or basket in tow.
And for the first few weeks I was not bothered and those young people were. But my day finally came. Coming back one afternoon from the fountain, a good three blocks from home, a policeman stopped me and asked where I was coming from. The fountain, I told him. And where do I live? Carrer Sant Antoni, I told him, pointing towards home. You’ve gone too far, he said. My dog will poop only at the fountain, I told him. And that was the end of that.
While some of my American friends were driving here and there, and living life pretty much like normal, here the streets were deserted, almost everything was closed, the police cars that drove around were just about the only cars moving on the streets. Except for the lack of foam for my coffee, all this suited me just fine. If there was this horrible virus you could catch, I felt better not having others around when I went out and for the rest of the time, I was happy to stay home and wait it out. All I had to do was buy more books. 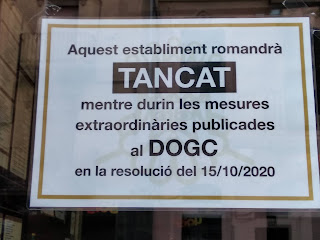 Eventually we could go out, but at restricted times: young people from 6am – 10 am; children (must be accompanied by at least one parent and only three children to a parent, or thereabouts) 10 am – 4 pm; elderly 6pm – 8 pm. It went something like that. In fact, it was so complicated that you had to write it down to keep it straight. I didn’t write it down because with my handy dandy dog, I could go out whenever I wanted to walk him.
When we were first told we had to wear a facemask whenever we left home, we weren’t told that there would be any penalty if we didn’t. There was no policing of it like there had been for the original lockdown; those in charge believed that people would assume individual responsibility. It took a surprisingly long time for the authorities to figure out that there was surprisingly little individual responsibility around and that nothing is mandatory if it isn’t enforced. Here about half the people on the street wore masks and the other half either had them hanging down around their neck or weren’t wearing them at all. But when the police started on their patrols again ready to impose fines, then suddenly everyone wore a facemask. And months later, we all still do.
Since then things evolved and confusion mounted. What you could and could not do changed frequently. These were restrictions based on epidemiological criteria, and also an attempt to consider both public health and the economy. But it wasn’t just the frequency, it was also the amount of details. When you could walk and the radial limit, how far you could travel and for what reasons, whether or not to use public transportation, what businesses could open and if they could open, what time were they required to close, how many people could they accommodate inside... it was (and still is) endless. And what to do when the rules of the Catalan government contradicted the rules of the Spanish government.
The most outstanding rule was issued recently by the city of Barcelona and concerned riding on their urban public transportation. Increasingly, researchers have said that the virus is spread through the air on tiny droplets, in other words, from person to person, through the air, when someone breathes, sneezes, coughs, laughs, sings, or talks. In a country where people rarely stop talking and do it loudly, city officials were concerned, so as of two weeks ago, you are not allowed to talk while on a Barcelona metro or bus. I wonder if that's working.
Besides imposing a curfew (11 pm – 6 am), a few weeks ago we were limited on leaving the county where we lived. And on weekends we could not leave the municipality. This was to prevent people from running off on weekends to their second homes in the mountains or at the beach and taking any possible infection with them to new and unspoiled territory. This peripheral blockade had been done a few months ago in Barcelona when their infection rates suddenly soared. There again, they said you could not leave the city at the weekend and that first weekend tens of thousands of people did just that. After that they had every exit from the city controlled by police on the weekends.
I didn’t think much about municipal restriction because I have no second home and if I want to leave town, I can do it legally during the week. What I didn’t count on was that all those people trapped in Figueres on the weekends would suddenly take to my walking path. Because while you are not allowed to leave in a car, but you are allowed to go on foot and no one guards the path. Suddenly there were hordes of people, families, bicyclists, children on bicycles. It looked like the Rambla of Barcelona. I found it dangerous to let Cupcake off his leash as I usually do and as he enjoys, and it just wasn’t pleasant. I go out there to enjoy the quiet and the views of the fields and far-off mountains. It was not possible to relax. Plus, with so many people around, I couldn’t take off my facemask and BREATHE. So I gave up those weekend walks and went on weekdays instead, where, as is normal, you hardly meet a soul.
On the question of foam, on 24 March I bought a milk frother (on Amazon since all the shops were closed) which came a few days later. Et voilà! Not only can I make foam at home, I can make mountains of it. Now that the bars and restaurants are open again (only until 9 pm), my routine is to have my breakfast at home and go out for coffee occasionally. They say the confinement may change the habits of some people, such as taking coffee to go and walking down the street with it. I will never walk down the street with a cardboard cup of coffee in my hand, but for the present, I am happy to make my own coffee, sit safely at home and enjoy it with all that foam and a touch of chocolate on top. 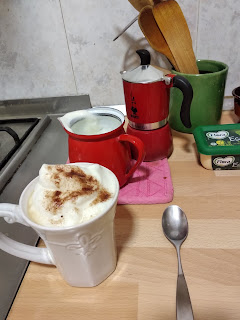