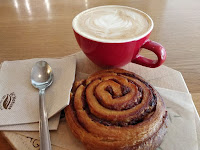 Here in Spain, when you go out for a coffee you have it sitting down or else standing at the bar. No one walks down the street with a coffee in their hand and you don’t see stacks of styrafoam or cardboard cups by the espresso machine. You drink your coffee from a ceramic cup while you relax, maybe for just the time it takes to swallow the little bit of espresso in your cup, maybe longer for a coffee with milk and a croissant, or maybe for half an hour or more while you sip and talk to friends or colleagues. People who are going to work leave enough time beforehand to sit and chat or enjoy their coffee alone.

All bars and restaurants here have been closed for five weeks and will be closed for a few more days. They are closed for seated customers but some have remained open for takeout and you can walk up to the door and order something to go. Not all of them are doing that because taking food or drink to go is not common here so there isn’t a big demand. But some are, and I have noticed that for the first time, there are a few people walking down the street in the morning with cardboard coffee cups in their hands. I wonder if this will end when the restriction ends, or if it will be a new trend.

At my usual cafe there is a group of four women that comes and sits outside every morning except Sundays. Telly, who owns a nearby jewelry store uaually arrives first at around 8:30, often 20 or more minutes before the others. She tells me she likes to come early, relax, have a cigarette and coffee before her friends come. The others come one by one and they stay until sometime after 9 when Telly goes to open her store, one of the others goes to open her florist shop, a third goes to her yarm store, and the fourth? she doesn’t work and I don’t know where she goes except that I did see her once at about 10 am at another cafe with another group of people.

When I was in Avignon some time back, I couldn’t get a room in my usual hotel so I was staying in a new one across town. That meant finding a new bar to have my coffee and croissant. I was quite happy with the first bar I found and went back there each morning. When I came back from that trip I wrote the following:

There were two days when I went in quite early for my coffee, and both times there was a group of eight or ten men sitting together at several adjacent tables.  This was a small café and they were taking up about half of it.  At first I thought they might be work colleagues having an early morning meeting even though some were dressed in business clothes and others were dressed casually.  But they didn’t all leave together.  And not only did they leave at staggered times, I noticed that some didn’t pay on their way out, so I asked the friendly waiter about them.  He told me they were friends who met before work every day.  The first man who left had paid for them all.  Apparently they take turns.  What a nice way to start the day – so much nicer than taking your coffee to go in a styrofoam cup and drinking it alone in your car.