The Day of the Book and the Rose

Today is Sant Jordi, for me, the nicest of the Catalan holidays. Saint George is the patron saint of Catalonia, but his popularity spreads far and wide. He is also patron saint of, among others, England, the country of Georgia, Malta, Portugal, Romania, and the boy scouts.

Saint George is the one who slew the dragon and saved the princess. Where the dragon’s blood fell, a red rose grew, and so the tradition in Catalonia is for men to give roses to women. But there is more to it than just roses. Early in the 20th century, it became the custom for women to give a book to men. This was started by a bookstore owner in Barcelona who noticed that Miquel Cervantes and William Shakespeare died on the same day and thought that somehow, that could make for good business. The book thing caught on and 23 April became the day of the book and the rose in Catalonia and has recently become UNESCO’s International Day of the book. Nowadays women give books and/or roses to men and men give books and/or roses to women because Catalonia is a modern and liberal society not totally stuck in gender roles, and because they value literature. Sant Jordi is the Catalan version of St. Valentine’s Day.

Pretty much every town has a plaza or promenade where there are book and flower stalls. Some of these are run by bookshops and florists, some by political parties, some by non-profit organizations. The main event, of course, is in Barcelona along La Rambla where today there are over 900 bookstalls and where they expect over a million people to stroll and buy books and roses. Total book sales for today throughout Catalonia are expected to exceed 1.5 million copies. 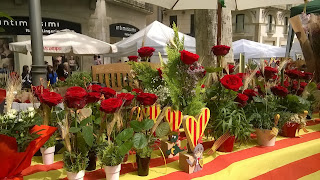 This year the holiday felt a little different.  You couldn't help but remember that the two Jordis, the two grassroots leaders, were both in jail. thrown there without a trial and denied bail.  Since the Spanish government has taken over the Catalan government, there will not be the usual institutional events such as the blessing of the roses at the government palace or the speech of the Catalan President since there is none.  Nevertheless, the illegally deposed president did issue a short video, not from the government palace but from Berlin where he is in exile.  He sent greetings for the holiday that were broadcast on Catalan news and on Facebook. This is not a Spanish holiday; it is celebrated only in Catalonia.