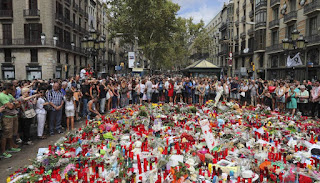 Last week an alternative Spanish newspaper broke the story that the Iman who was the head of the terrorist attack in Barcelona and Cambrils in August 2017 not only had been a CNI (Spanish secret servie) informer (we already knew that) but he was still an informer at the time of the attack, in contact with the CNI right up to a few days before. In addition, the CNI had been monitoring the cell phones of all the other members of the group. They knew all their movements and their communication. The day after the attack, the CNI erased all records of the Iman from their files.

The CNI didn’t share any information about the Iman or the terrorist cell with the Mossos d’Esquadra -- the Catalan police. Although it is the Mossos, and not the Spanish police, who are responsible for security, including terrorist attacks, within Catalonia, the CNI and Spanish government have barred the Mossos from participating in Interpol, where 194 countries share relevant information concerning terrorism as well as other internation criminal activities such as drug traffic. You get the feeling that the Spanish government is not interested in security when it comes to Catalonia.

The day before the Barcelona and Cambrils attacks, there was an explosion in the small town of Alcanar, south of Barcelona, near Tarragona. The explosion was apparently an accident, caused by the explosive materials being manipulated by the two men in the house, both of whom were killed. Both were part of the terrorist cell that attacked Barcelona and Cambrils the next day, the same group that the CNI had been monitoring for months. The Iman and one other member of the grroup died in that explosion. But the Catalan police didn’t know anything about them. The Spanish secret service hadn’t told them anything, so the Mossos set out to investigate the explosion, starting completely from scratch.

The next day, another group member drove a van down the Rambla in Barcelona, killing 14 people and wounding over 100. Later in the day others in the group drove into people near the beach in the coastal down of Cambrils and killed one more person.

It was the Mossos who were in charge of the investigation when the explosion happened in Alcanar, but they didn’t not know at first that they were dealing with a terrorist group, although it probably became evident quickly enough when they saw all the explosive materials that were there. The next day when the van drove down the Rambla, it was the Mossos who were in charge of stopping the attack as soon as possible and finding the perpetrators. At that point they had no idea who they were dealing with and the CNI did not help. Nevertheless, the Mossos were able to track down the people involved within a few days, arresting some and killing the rest. They had not been privy to the CNI information in their research, except that soon afterwards it became known that the Iman had spent some time in a Spanish prison and had once been a CNI informer.

Major Josep Lluis Trapero was the head of the Mossos. By all accounts, he did a brilliant job, finding the culprits and keeping the public and the press informed (in at least four languages at all times – Catalan, Spanish, English, and French) of developments as they happened. Cool, calm, and effective, he became a national hero. A few days after the attacks, the Spanish police “leaked” the information that the Mossos had been warned of the attack some time in advance by the American agency, the CIA. A memo to that effect was somehow given to one of the Spanish newspapers who published it. In the end, it turned out to be phoney. The format was not right nor was the English! It was simply the Spanish trying to discredit Major Trapero and the Mossos for having done an excellent job, with no help from those who had valuable information but no itention of sharing it. The information that they had hidden important material both before and after the attack was not to come out for over a year – until last week.

But they did eventually get to Major Trapero. He has been accused of sedition for the way he directed the Mossos during the 1 October referendum that the Catalans did manage to have. The accusation is that his police did not work to remove ballot boxes as directed. The fact is that his police removed more ballot boxes than the Spanish police did, but whereas the Spanish police did it wearing riot gear and attacking everyone (men, women, and children) within arm’s length with clubs (injuring 1000 people), the Mossos did it peacefully, as was appropriate in a non-violent atmosphere.  The Spanish didn't like that.  Our hero. His trial will begin in September.

Terrorism is an international, not a local problem. The victims were not only Catalan: they included people of 34 nationalities including Algerian, Australian, Belgian, Canadian, Chinese, Cuban, French, British, Greek, Dutch, and American.

Sixteen people from several countries died in that attack, and over 100 were injured. In any normal country, when information becomes known that the head of the attack was a secret service informer, the minister of the interior would probably have to resign, the government would open an inquiry, and the press would be talking about it. But here in Spain (except for Catalonia) there is complete silence. None of the major Spanish media – not newspapers and not television -- has talked about it at all. When it was known that the Iman had been a secret service informer, the Spanish Congress refused to open an investigation, with votes from the Socialists, PP, and Ciutadanos voting against. Now much more has become public, including that the relationship between the Iman and the CNI was not history, as previous said, but ongoing and recent – right up to five days before the attack; that the CNI had also been monitoring everyone in that cell and knew much about their movements and their plans; and that the CNI destroyed their file on the Iman the day after the attack. And yet the government still says there is no need for an investigation.

I have heard no one say that the CNI knew of the planned attack in advance and was satisfied to let it take place. No one has said that yet in public. But I’ve been thinking it. Why else would the Spanish government want to avoid an investigation?

Was the government sympathetic to a terrorist attack in Barcelona? After all, at that time they were bribing (and the King was phoning and pressuring) big banks and corporations to move their headquarters out of Catalonia in order to hurt the Catalans economically, and shortly afterwards (in October) their police attacked thousands of peaceful citizens, saying afterwards that those people had been violent (in spite of hundreds of videos that show the opposite). No, it would not surprise me if the Spanish government thought that a terrorist attack in Barcelona was just what that city needed to bring it into line and make the Catalans frightened or distracted enough to forget about holding their referendum on the question of whether or not they wanted to remain part of Spain. If that was the plan, it didn’t work.

An article in El Nacional (in English), the paper that broke the story about the Iman informant and the CNI surveillance of the group.  Within the article you will find several links to related articles.
https://www.elnacional.cat/en/news/barcelona-terror-attack-informer-spanish-intelligence_404155_102.html
Posted by Dvora at 4:25 PM