Where Have All The Flowers Gone?

The path to Vilabertran changes throughout the year, season by season, and day by day.  Sometimes there are surprises such as outstanding clouds or fields that were full of corn one day and bare the next.  But this week I had an unpleasant surprise, and it was not the result of a harvest.

Lately, as I’ve been waiting and hoping for some poppies to pop up, what has been springing up instead has been alyssum that’s been growing along the sides of one section of path.  Alyssum is a weed; late last fall several of the fields were covered with it.  I looked it up to see if it were perhaps being grown as a crop but it turns out that no one wants to eat alyssum, not even rabbits. 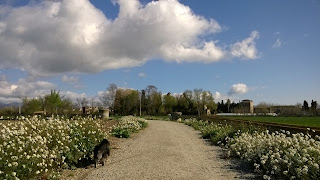 I was enjoying the alyssum.  It added a nice spring touch to my walks and my photos.  When I saw two city workers taking weed whackers to the sides of the path, it never occurred to me that they were going to work their way over to the flower-lined section and whack away the pretty flowers.  But when I came back on Thursday, the flowers were all gone and the edges were bare. Most civilized people would agree that flowers are a good thing -- that they make the world more beautiful.  But people around here don’t seem to know or appreciate that.  I am angry so I’ll say it.  If you want streets with colorful flowers, cafes and bars that are nicely decorated, places that lift your spirit and encourage you to relax, go to France where aesthetics are considered important.  Here they don’t even leave the wildflowers in peace to make the world just a little bit more beautiful.