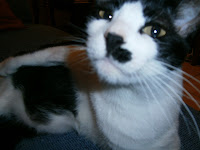 Felix, my adorable little tuxedo cat, is not well.  He hasn't been well since Avi left in early May.  At first I thought it was because of the disturbance of having a guest in the house, but eventually I realized it was more than that.

Felix is having problems with his kidneys.  I'm trying to do what I can for him.  His situation isn't desperate, it isn't kidney failure, at least not yet.  But he clearly isn't his usual happy, verbal, playful self.  He's had a change to a special diet that allows the kidneys to process less, he's been drained of blood and urine for tests, and pumped full of cortisone and antibiotics.  All this has yielded some improvement.  But we're not there yet.  And of course, I'm worried.

This afternoon he and Minnie have spent considerable time under the bed.  This is not because of any illness, but because of standard cat behavior that when there is a thunder storm, you run for safety, and safety is always somewhere other than where you presently are.  It's good that I've got the balcony secured so that they can't jump off, or who knows where they would run for safety.

Unlike my cats, I love storms.  I admit that thunder sometimes frightens me too, but I find that living in an apartment (and not one on the ground floor, or directly under the roof) gives me a feeling of safety, even as the sky lights up, thunder cracks and crashes, and rain pours down.  Up here I have the distinctly safe feeling that none of this will touch me.  And I can safely sit by the window enjoying the aroma of rain and the spectable of the storm... while my poor cats cower in fright under the bed. 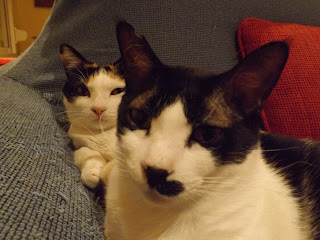