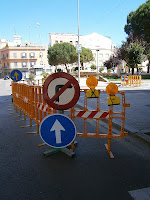 Last Friday night I had the worst asthma attack I’ve had in years.  The next morning, once I was feeling better, I went to see what additional medication or advice I could find at the pharmacy so that I could control it better if it happened again that night.


Unfortunately last Saturday was a holiday (Sant Pere) and my pharmacy was closed.  (You do sometimes get fed up with so many holidays.  Even locals get caught out.  I passed a woman with her shopping cart stopped in front of a small supermarket while I was walking and she asked me if I knew why the store was closed.  I told her it was Sant Pere.  She had nothing to make for lunch and realized she was going to have a problem.  I tried to cheer her by telling her that the outdoor fruit and veg market was open.)  On holidays and Sundays when pharmacies (and most businesses) are closed, there will always be one pharmacy in town that “stands guard” and is open.  My pharmacy had a sign up that informed me that the pharmacy at Carrer Gonzalez de Soto 71 was open that day.


I didn’t recall having ever seen this street, so I asked a passerby if he knew where Carrer Gonzalez de Soto was.  He pointed ahead and said “You know where the school is?  Well, the next street, or no, maybe the one after that is Gonzalez de Soto.”  I thanked him and walked ahead down Carrer Sant Pau. 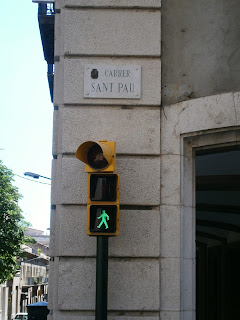 I passed the school and looked at the next street.  Not it.  I went one more block, also not it.  While walking to the third street, I asked another passerby if he knew where Carrer Gonzalez de Soto was.  He thought about it a little and then turned, pointing back to where I had come from, and said that at the triangular plaza (where my pharmacy that was closed is located) I would find it.  I knew that wasn’t right, so I thanked him and kept on.


When I reached the next street I came across a man closing his garage door – a sure sign that he was a local -- and I asked him if he knew where Carrer Gonzalez de Soto was.  He gave it some thought and said he thought it was somewhere back in the direction from where I had just come and off to the left – somewhere near the post office.


I’ve walked to that post office from my apartment many times, up one street and down another, and neither is called Gozalez de Soto.  Even so, I had the feeling that his information was good, but as it was a little vague and rather than walk back and forth and get nowhere, I decided to walk home, which wasn’t too far away, and look at my map.


It turned out that all three men had been close.  I had been walking on Carrer Sant Pau.  The school sits on the corner of Carrer Sant Pau and Carrer Muntaner.  That is if I were to look to the left.  If I were to look to the right Carrer Muntaner is called Gonzalez de Soto.  This isn't the only street in Figueres that suddenly changes its name for no apparent reason.  I found several others while consulting my map. 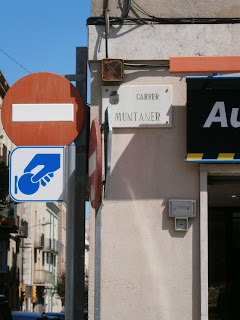 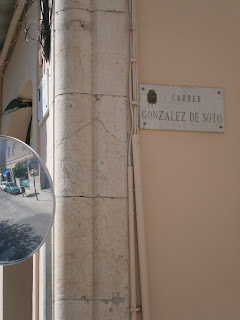 Some blocks up (in the direction of the post office that the last man had pointed to) I found the one and only pharmacy that was open.  Unfortunately, when I told the pharmacist my problem she explained that they had no other medication besides the inhaler that I already possessed.  If it wasn’t helping, I would have to go see my doctor or the emergency service at the hospital.