One and a Half Million

One and a half million people marched for Catalan Independence in Barcelona on 11 September, Catalunya’s National Day, La Diada.  If I had gone, it would have been 1,500,001.


I would have liked to have gone in order to show my support.  But I’m not sorry I stayed home.  I show my support in other ways, ways that right now, I find more suitable.  The march was immensely crowded and in fact many of the people at the starting point never left it.  For three hours they were stuck there because there were so many people they couldn’t move.

Barcelona was an ocean of Catalan flags (senyeres) and estalades, the Catalan flag with the star, the symbol for Independence.  It was an event for all ages, young, old, families with children.  I watched it on television and it looked like a party.  Everyone was happy, making music, making castells, making their voices heard chanting Independence, creating no disturbances.


The march was organized by a non-partisan organization called Assemblea Nacional Catalana.  Many politicians attended the march, but partisan symbols were not much on display.  This was a unifying event for everyone who wanted Independence for Catalunya and it was all the better for it.


One of the reasons people feel compelled to march is that they are not allowed to vote.  Although Spain claims to be a democracy, it is illegal to have a referendum on the subject of Independence.  It’s unconstitutional.  For that matter, seceding is unconstitutional.  So exactly what the Catalans (or Basques) are supposed to do is a matter for speculation.  I suppose one option is what some Basques did within the terrorist organization ETA.  I am grateful that the Catalans prefer to march.


Artur Mas, the President of the Catalan Regional Government, the Generalitat, went to Madrid two days after the march to voice Catalan sentiment regarding Independence to the Spanish government.  He did not go to an official meeting of the Parliament, but held a public conference.  Neither the President of Spain nor any of his cabinet ministers attended.  There was, however, an official representative from the monarchy.


The Spanish government sent no one to listen.  And they have made almost no comments at all concerning either the huge march or the question of Independence for Catalunya except to say that a Referendum is unconstitutional, seceding is illegal, Catalans should be more solidary, and there are other matters more important to pay attention to.  If you were a Catalan, what would you think of that?


Catalans pay their taxes to Madrid and then Catalunya gets some of that back to carry out the responsibilities of the autonomous community, including health care, education, social services, police, etc., much like the individual states of the United States.  The rest of the money gets distributed to other, supposedly poorer autonomous communities.  The problem has been that those other communities have been receiving a disproportionately greater share than what Catalunya gets back, so that Catalunya is being systematically reduced in its capacity to maintain services and drive a viable economy while other communities enjoy the benefits.
I can’t help thinking of the goose that laid the golden egg story.  You would think Catalunya would get its fair share back if not extra, since this is one of the few places in Spain where any wealth is generated although it won’t be for long if its businesses keep being hammered.  But maybe logic has nothing to do with it.  There is a real antipathy for Catalans in Spain which I saw for myself on my first and only trip to Madrid.  Spain seems to want Catalunya but without any Catalans in it.  And in fact, years ago, Franco orchestrated large migrations of Spaniards into Catalunya to achieve exactly that.


Everyone was at the march.  The firefighters had a contingent with a banner, Bombers per la Independencia.  The Catalan police were there with a banner, Mossos per la Independencia.  Celebrities, politicians from all but one political party, young people, parents, children, grandparents were there.  Artur Mas, the President of the Generalitat wasn’t there but he said it wouldn’t be appropriate for him in his official capacity to go.  His wife, however, was there.  Pep Guardiola, beloved former trainer of the Barcelona futbol team was in New York and couldn’t be there, but he sent a video where he quietly repeated the official slogan of the march “Catalunya, nou estat d’Europa.”  My friend Trini was there and took photos. She also designed a slideshow that shows the ambience of the day and is set to wonderful Catalan music which you can find at http://www.youtube.com/watch?v=vMQC0yv_52M&feature=plcp.  And last, but not least, she kindly sent me some photos so I could post them because as you know, I was the only one who wasn’t there. 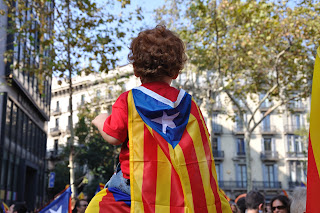