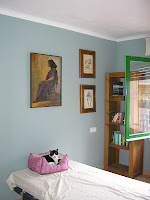 Hoping to someday have a guest, and endeavoring to improve upon the garish wall treatment I inherited, last week I had the spare bedroom painted.  A few days later, my handy mason and all around Mr. FixIt, Josep, came back with his drill to help me hang more pictures.


The room now looks great.  In fact, I like it better than my own bedroom which is painted a sickening shade of peachy apricot and has virtually no natural light.  There is a small window, but apart from it being partially blocked by a wall-to-wall armoire (that I also inherited) it opens out to the light well, a space where the sun never shines and which thus gives no light.   On the other hand, if there was more light, the awful apricot/peach walls would make an even greater impact. 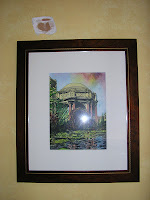 Picture-hanging turned out to be more exciting that I had expected.  No, we did not discover any medieval or Roman ruins.  But while drilling one of the holes, we did suddenly heard a strange noise from the other side of the wall.  Sadly, Josep had the bad luck of drilling at a point just where two bricks come together so that the plaster on the other side broke and landed all over my living room floor.  Josep said it could have been worse.  Sometimes one drills and hits an electrical wire or worse, a water pipe.  Josep also said it isn’t worth buying a bag of plaster to redo such a small hole, so when he or any of his friends have a small amount left from another job, he’ll come back to fix it.  I don’t know when that might be.  But I do know that when the time comes, matching the paint – two shades of yellow, one sponged over the other -- will be a challenge. 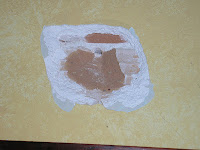 
Who knew when this technician would come.  On a Sunday they told me Monday.  And in fact, a technician called on Monday and was prepared to come the next day to some address he had for me in Tortosa.  I told him I never lived in Tortosa.  I live in Figueres.  The Orange technician who installed the service came to this address in June.  Surely Orange has a record of it.  He apologized and said someone else would call.  Tired of getting nowhere with Orange I decided to change to Movistar.  They owned the line and once they set me up, would be more likely to come and fix it if there was a problem.


Movistar came on Friday and brought a Movistar router.  It took a while for the technician to set things up because there was a problem with the line and he had to go up to the roof to untangle wires.  Apparently this is not unusual.  When that was fixed and he tested it with his computer, the internet worked.  So we fired up my computer.  No internet.  Surprise!  The problem had been both with the line and with my computer.  When he left I ran off to the shop where I bought the thing, and just before 8 pm they had it ready for me, all cleaned up and rid of the virus that had caused it to be ailing.  And that’s why there was no post on Friday.
Posted by Dvora at 7:21 PM