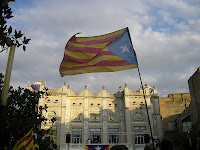 Momentum is building for the March for Independence that will take place in Barcelona on 11 September, Catalunya’s National Day.  So many people are going that all the private bus companies have run out of buses for that day.  Seven hundred buses will be bringing people from every town and village to the capital.  Tickets for many of them have already been sold out.  In addition to private buses, the cities of Girona and Figueres have also contracted for two special trains that will transport an additional 1000 independenistes.  I will not be among them.  I received several offers to march together from blog readers (thank you!) but have decided to stay home that day and cheer on the crowd (sincerely) from my living room while I watch them on TV.


The official banner for the march has been unveiled.  It says Catalunya, a New Nation of Europe.  Josep Antoni Duran i Lleida, the head of one of the right-wing Catalan political parties, today changed his mind and decided he would attend the march since, he said, it was not about independence.  Why he would say that I cannot fathom.  I’ve been wondering how many people will march.  Tens of thousands?  I’m sure it will be massive and can now feel a bit off the hook since Duran i Lleida will be there to take my place, even if his motives for going are a mystery.

N.B.  I've been thinking about it and have revised my estimate.  I think there will be at least one million at the march.  Let's see if I'm right!


Barcelona and Madrid have recently been rivals (yet again) in their bids to have the new EuroVegas built in their municipalities.  It makes no sense to me that the Catalans would want such a thing.  It’s not news that the Vegas casinos are closely tied to mafias.  Why invite gambling dens, mafia, and the prostitution business that comes with them to your house?  But two days ago a Madrid spokesman said that the Americans have decided on Madrid for the new venue.


Not to be left behind, today the Catalan Generalitat came out with the news that Catalunya was going to be the site of the new Barcelona World.  This is a theme park that will be bigger than anything built before and will create 20,000 new jobs.  La Caixa, Catalunya’s largest (stable) bank owns the land and the major investment comes from a Spanish billionaire businessman.  It will include themed areas representing different parts of the world, hotels, restaurants, and casinos.  At least casinos will be only a minor part of this new development.  And unlike EuroVegas that was going to be built on agricultural land near the Barcelona airport, Barcelona World will be built adjacent to Port Aventura, a theme park on the coast near Tarragona, on land that is already laid out for development, albeit that was supposed to be housing units before the current economic crisis hit.  I’m not thrilled with either of these projects, but I think that Catalunya will be much better off with the more benign, family-oriented Barcelona World than it would have with a Las Vegas imitation.  When it’s built, I won’t be going to that either.
Posted by Dvora at 10:36 PM