Why do I love Catalunya?  Because two grassroots citizen groups (working together and both led by women) can organize a logistically complicated demonstration of 1,800,000 people.  And because those 1,800,000 people care enough to make the effort to get out and come to Barcelona, some traveling hours to get there.  And when they get there they are civil, peaceful, celebratory, and don’t even leave any garbage behind when they head back home!

11 September is Catalunya’s National Day – kind of like the 4th of July, but different.  It is different because on 11 September 1714, Catalunya LOST their war.  Together with England, they had supported the Habsburgs, the Spanish had supported the Bourbons, England left Catalunya in the lurch, and Catalunya ended up becoming part of the Spanish kingdom with a Bourbon king.  They still have a Bourbon king, but that’s another story.

Last year’s 11 September demonstration was a 400-kilometer-long human chain, stretching from France to the Valencian border.  One million six hundred thousand people participated.  That was also a great logistical achievement.

This year they opted for something more condensed, but even more complicated – the letter V formed along two major boulevards that run through Barcelona at an angle and yes, meet in a V.  The letter V stood for vote, “voluntat” which means will (as in the will of the people), and victory (for when the independence vote wins in the referendum).

But it was more than the letter V, it was also an 11-kilometer senyera (the name of the Catalan flag).  The senyera has four red stripes on a yellow background.  People signed up in advance and were assigned a section to report to, organized so that those who came from the same area would be in the same general area on the V.  They all wore either red or yellow t-shirts.  The sections were broken into smaller sections – four of red and five of yellow.   Here is a time lapse of how a section formed up. 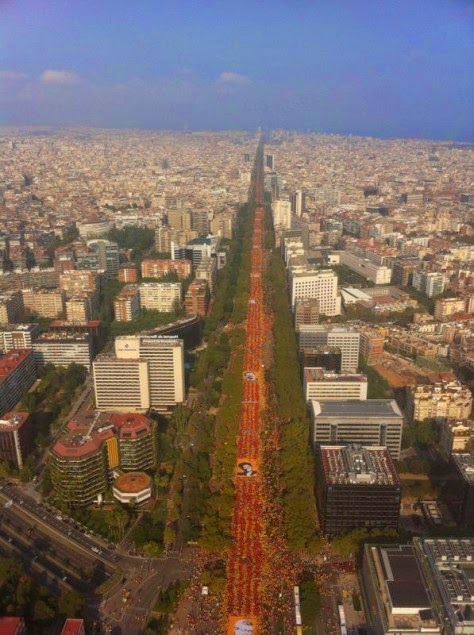 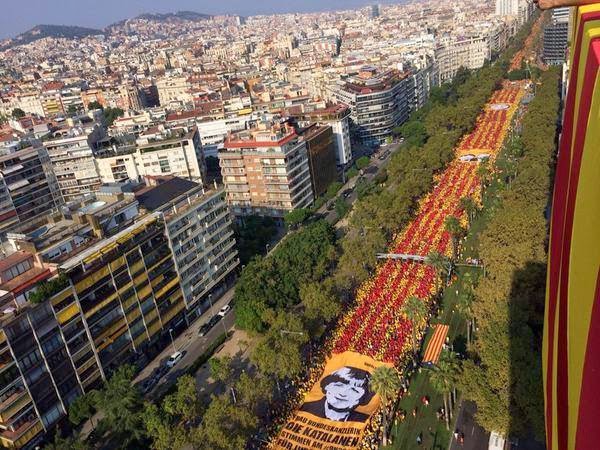 As in the case of the two previous years, the culmination of the formation would take place at exactly 17:14 to commemorate the infamous event, this time on its 300th anniversary.

The two boulevards were the Gran Via and the Avinguda Diagonal.  It would run a little more than 11 kilometers.  There was organized entertainment, including 54 colles (teams) of castellers (the people who make the human towers) and big screens along the route, with the main stage located at the vertex.  There, at exactly 17:14, a young woman cast a symbolic ballot.  She will turn 16 on 9 November, the date set for the referendum, and she will be able to vote for the first time, 16 being the minimum age set for this special ballot. 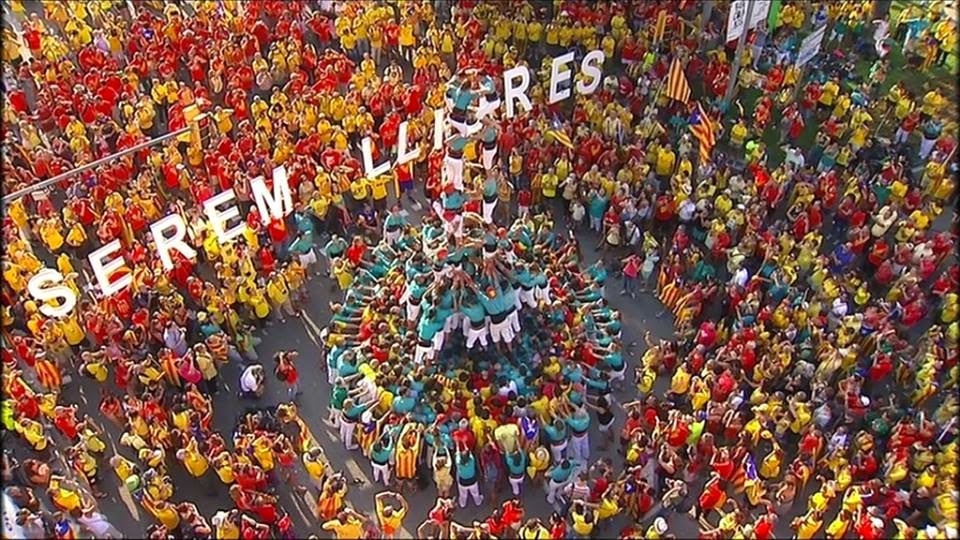 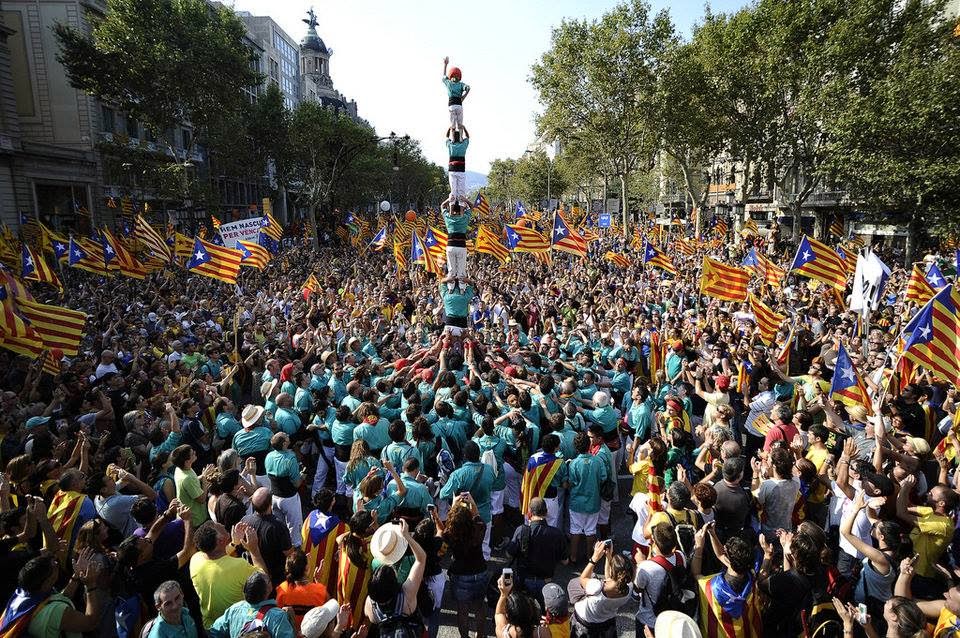 Two thousand buses were chartered for the V and 100,000 cars entered the area, bringing people from every town and village in Catalunya.   At about 3 pm they closed the central part of the city to all traffic, and people began to come to their assigned places along the V. 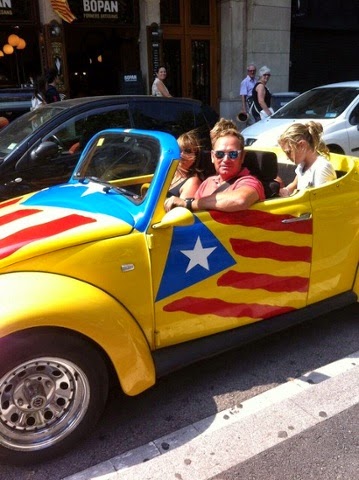 The Spanish government says it will not allow the referendum to take place.  They hide behind the Constitution, although there are many legal experts who say that in fact, the Constitution does not prohibit a referendum.  Pretty much on a daily basis, the Spanish President or someone from his political party (the PP) says that in a democracy, you must obey the law and the law says you cannot vote on a referendum.

But democratic rights take precedence over the law.  Constitutions are there to protect people’s democratic rights, not limit them.  There are such things as bad laws.  It used to be the law that only men could vote, that blacks had to ride at the back of the bus, and in Germany, that Jews had to wear yellow armbands.  Constitutions are not carved in stone.  If, in fact, the Spanish constitution prohibits people from voting, then it needs to be changed.  The American constitution has 33 amendments.  The Spanish could use one.  But the Spanish don’t want one.  They could allow the vote.  They don’t want to.  They’re scared.  Very scared.  When Catalunya declares its independence, Spain will lose its goose that lays golden eggs.

The Catalans just held the biggest demonstration ever held in Europe.  The Catalan V received support from groups around the world.  It was also covered in the press around the world.  Scotland will vote on its referendum sooner, although it doesn’t seem to have the support for independence that the Catalan referendum has.  The Basques are watching with a new light in their eyes.  The Flemish in Belgium are taking note.  There are changes afoot here in Europe making it a very exciting place to live right now.

All photos were taken from online media sources
Posted by Dvora at 9:18 PM