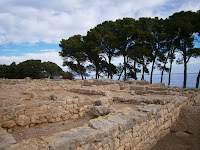 I have a friend, Jaye, who is from New York, lives in France, and prefers Spain.  I am from California, live in Spain, and prefer France.  In spite of these differences, Jaye and I tend to see the world the same way, have similar rhythms (although being a New Yorker, hers is slightly faster than mine), and get along very well.


Yesterday Jaye came down for the day and we went off to see the Greek and Roman ruins at Empúries.  We both love that we live in places with so much history, some of it evidenced by the buildings that surround us, and some of it under our feet.  There is little left standing at Empúries.  They’ve been excavating the site since 1907 and what you see mostly are the uncovered foundations of what was first a Greek, and then a Roman city.  Picturesque it is, sitting at the top of a small rise, overlooking the Mediterranean. 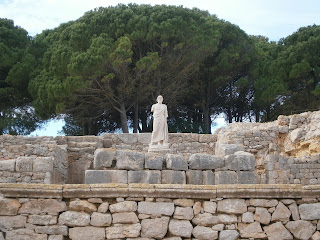 Ruins were not the only thing on our agenda.  Girls have to eat.  Lunch was at La Terrassa d’Empúries in Sant Marti d’Empúries, and lunch was calçots!  Calçots are those marvelous early spring onions, unique to Catalunya.  They are reburied while they grow in order to increase the length of the edible white part.  (More about calçots in this earlier blog post.)  They are mild, almost sweet, the best ones, grown in Valls, are protected by a Domination d’Origen.  They are heavenly, even if they do come to the table all charred black.  You just hold the green ends, pull down on the outer layers, and reveal the tender white meat.  Marvelous.   Bon profit! 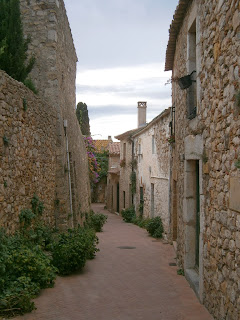 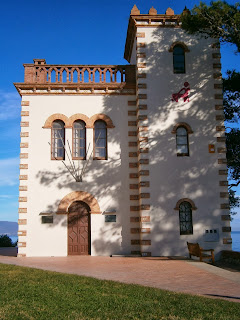 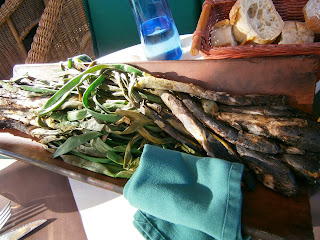 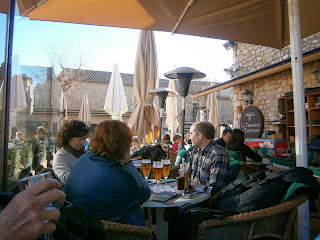