Catalans Paving the Way to Independence

Last year on 11 September, Catalunya’s National Day, a massive demonstration took place in Barcelona.  Over 1 million people took part in an unprecedented outpouring of support for independence that moved the Catalan government to hold special elections and, with the clear independence mandate, take up independence as its main objective.


This year, on 11 September, a human chain will mark the pathway to Catalan independence, stretching along the length of Catalunya, from the French to the Valencian borders.  Called the Via Catalana Cap a La Independencia, it will follow along the ancient route that was once the Roman Via Augusta.


Those 400 kilometers will be manned by people standing along highways, country roads, and city streets, holding hands, making their peaceful but determined statement that Catalans want to and will vote on a referendum to decide their own future, whether the Spanish government approves or not.  And although I didn’t go to the demonstration in Barcelona last, year, I’ll be there holding hands with strangers this year.


In order to have a place on the chain, you must sign up in advance.  They are coordinating it so that the urban areas aren’t overloaded while the rural stretches go unmanned.  There will be some transportation to take those who are willing to travel to those areas where fewer people live and where the chain needs reinforcement.  So far 300,000 people have signed up.  But I expect that on the day there will again be 1 million.


The organizer of these demonstrations is a grassroots movement – the Assemblea Nacional Catalana (ANC).  Some weeks ago the ANC announced that it would be producing t-shirts for participants to wear.  They would be yellow, as that is a color that is visible from afar.  This event will be photographed and videoed from land and air and if everyone wears yellow, the images will be more impressive.  Yellow looks really really bad on me and I never ever wear it, but as soon as they went on sale, I bought one.


Initially the t-shirts could only be bought online.  I printed out my receipt but nowhere did it say when the shirts could be picked up.  So I waited to go to the designated local pick-up point, figuring it would take at least a week before the shirt actually arrived. 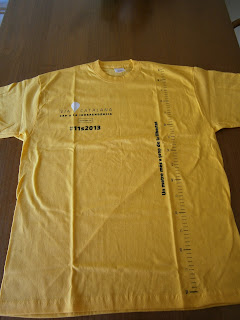 Some days later, as I entered the nearby supermarket where I do my shopping -- lo and behold: At the entrance was a display of the yellow t-shirts.  I could have saved myself two long hot and sweaty walks.  But never mind.  I was glad to see that the shirts were being so actively marketed and had become so easily available.  When I went back to the supermarket three days later, I was even happier to see that the shirts were almost sold out and the shelves were practically empty. 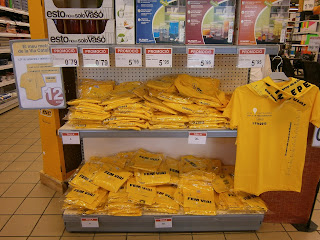