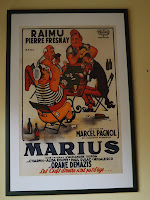 I noticed years ago that if I had a pet with me when I moved, wherever I landed, it would immediately feel like home.  Home is where my pets are, even if there are no pictures on the walls.  But at some point pictures have to hang and I need to attend to the details that make an empty shell more my own.


The day I moved into this apartment, in spite of it being summer and before opening windows for the cats to sit on the window ledge or go out onto the balcony, I put up plastic wire so that they couldn’t jump off.  Then I painted the two wooden windows because they were in a poor state and only going to get worse.


A few weeks later I painted the guestroom.  It had been a child’s room and had been painted a ghastly combination of yellow and pink.  Each color was ugly, and together they were exponentially awful.  I thought I might have a visitor coming soon and knew I had to repaint.


I always knew I would also paint my bedroom, but I figured that could wait.  My bedroom is an interior room with one small window which I leave shuttered most of the time.  One of my few initial improvements was to hang a new lamp in the bedroom, but it didn’t really give much light.  On the other hand, brighter light would emphasize the ugly color of the room.  It wasn’t peach and it wasn’t apricot, but some sort of watered-down yellowy peachy color.  All the pictures I hung on the walls looked dreadful, in spite of the fact that I’ve had them all for years and always liked them before.  I thought maybe my taste had changed. 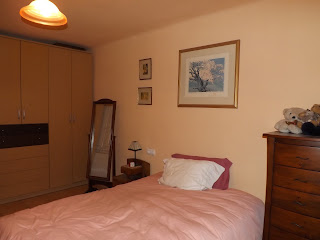 Josep, my painter (and mason and all-round handyman) came this weekend to paint the room the pretty taupe color I had chosen.  Without his saying anything, I could tell he thought that I was making an already dark room even darker with my choice of paint.  Sometimes I ask people’s opinions about things, but when I do, most of the time I then go ahead and do what suits me, and so it was with this paint.


While he was working, I put in a stronger bulb so he could better see what he was doing.  Eureka!  Why hadn’t I thought of a low-watt/energy saving bulb before?  For less energy the bulb gave noticeably more light.


Paint dried, I rehung my pictures.  I now have a bedroom I really like.  When I change the color on the bed, it will be perfect.  Poc a poc, as they say -- little by little. 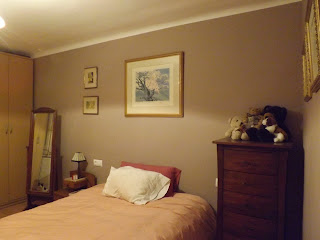 Although I’ve been thinking of repainting my dining room, I am not yet convinced that I will any time soon.  But change it I did, also this week.  For some reason I had a bee in my bonnet about getting hold of a poster from one of Marcel Pagnol’s Marseille or Fanny Trilogy films.  I love those films and I love the posters.  If you’ve ever been to Chez Panisse (Panisse is one of the characters in the trilogy, as is Cesar and Fanny) you’ve seen what I’m talking about.


It wasn’t easy, but I did find what I wanted and after some hassle, I managed to order it from a bookshop in the U.S.  It arrived in the mail in less than a week!  I took it to have it framed, and yesterday Josep drilled some new holes so I could hang it.  I think it looks fabulous hanging next to Sue's Cowboys.  The apartment is becoming more mine with each new glob of paint and every new hole in the wall. 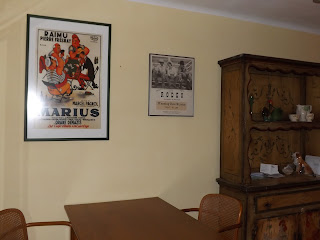