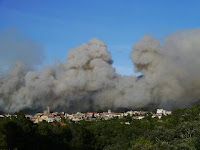 I could smell smoke.  I thought maybe someone was starting a barbecue.  That would not be a good idea here where there are only apartment buildings with balconies.  And besides, the wind was blowing.  Surely a barbecue would be unsafe and illegal.


The smell of smoke (not cooking) continued and after a while, there was a cloud of smoke visible fairly high above.  This was not a barbecue.  I turned on the TV to see what was happening.


There was a wildfire that had just started about an hour before about 20 kilometers north of me, just at the French border.  The tramuntana wind was blowing, rapidly moving the fire southwards.  A few hours later the smoke cloud became so thick and dark that I had to turn on the lights in the apartment.  Although the smoke seemed to be travelling high up, I closed the windows to keep out the smell. 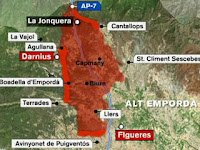 That afternoon, propelled by the wind, the fire travelled at a rate of 6 kilometers an hour and arrived to just within six kilometers of Figueres, the city where I live.  I was frantic.  They had evacuated some of the small villages along the fire’s route.  Would they evacuate Figueres too?  Should I anticipate being told to leave, pack up the two cats, and head for my car?  Could I manage to carry both of them at the same time?  But where would I go?


I called the information number of the Generalitat.  They told me that if an evacuation was called for, the authorities would tell us.  How would they tell us?  What if we lost power (other places already had)?  Surely they wouldn’t be calling us individually by phone.


I called the only person I know in Figueres – Josep, my handyman who lives just a few blocks away and has a small granja (farm) with chickens and a vegetable garden outside of town.  Josep told me not to worry.  The fire wouldn’t enter into Figueres.  It was a little reassuring to hear him say that, but was that just the usual shrugging of the shoulders thing, or did he really know what he was talking about?


Not knowing what to do, I didn’t do anything except watch the 24-hour Catalan news station and keep an eye on the postings of the website of the Generalitat.  Thank goodness at least I could speak to ask questions and understand the language so I could read the information, listen to the news reports, and not be completely mystified.  And yet, I really didn’t know what the procedure was likely to be.  There have been many wildfires since I’ve lived here, but I don’t remember any that threatened a city.  Usually they are in less populated areas and then yes, villages have been evacuated.  But it would be difficult to evacuate a city like Figueres, especially when you consider that the major roads nearby were closed.  Yes, the major roads were closed.  I had learned that from my two sources.  Thus, hopping into the car might mean just sitting stuck somewhere.  Probably better to stay home.


This wasn’t a forest fire.  There is some forest, but the whole area is populated and much of it is farmed.  Most of the area is sparsely populated, but it is dotted with farms (not corporate farms, farms with farmhouses that have people living inside), livestock, and small villages.  In fact, all of Catalunya is more or less populated and the only wilderness you find is in the Pyrenees and the smaller mountains of Montsant and Els Ports, and even there you find some (if fewer) farms, livestock, and villages.


No, it wasn’t a forest fire.  It was a wildfire.  It started at about 1 pm on Sunday afternoon.  They are extinguishing the last of it today, Friday.  It burned 14,000 hectares or about 34,600 acres.  Two people died: One from burns, the other from a heart attack.  Many people have lost their homes, their farms, their businesses.  We, as a community, have lost a large area of beautiful green countryside.


Moving alone to Figueres, where I didn’t know anyone, was a little scary.  Last Sunday was deeply frightening, that is, until 8 pm Sunday, when authorities came on TV to tell us that we, in Figueres, were not in danger, that the city would be protected, and that we should simply stay indoors with the windows closed.  Thank goodness.  Not knowing what to do, I had done the right thing.  It allowed me to go to bed, later, and actually get some sleep.


Some hours after the first fire started, a second one ignited not far away, just outside of Portbou, the last coastal village before the French border.  This was a smaller fire, but it also claimed two lives. There was a parade of cars on that small highway, most of them French tourists, probably looking for an alternative route home since the two main highways were closed.  This fire, also propelled by the tramuntana wind that blows especially fiercely at that point on the coast, suddenly swept down to the highway where the cars were backed up.  People tried to escape the flames by abandoning their cars and heading for the sea.  But the road is above cliffs and the way down is steep and rocky.  One young girl fell into the sea and drown, followed by her father who also died.


Both of these fires had started from cigarette butts thrown from car windows.

N.B.  The three images I've used I found on the internet.  Thanks to those who took them, I don't know who you are and I hope you don't mind!
Posted by Dvora at 5:42 PM