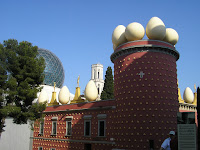 Most people probably never heard of Figueres.  Those who have know it is where the is located.  The was the reason Manel and I went there many years ago, when we were visiting his sister Pepita on the Costa Brava, before we came to live in .  I don’t like Dalí.  The man may have been a genius, but my overwhelming impression on visiting his museum (that he designed himself) was not that I was seeing art created by a genius but rather, that I was experiencing the manifestation of the world’s biggest ego.

The museum brings lots of tourists to the town.  Not being on the sea, not being a resort, and not having any other major attraction apart from Dalí, Figueres is just the sort of place I was looking for to set up my next home.  A big town/small city that is more or less normal – that is to say not flooded with visitors in July and August and then dead the rest of the year.

I had hoped to move to once I sold my house, but there were too many legal difficulties and I finally gave up on that dream.  So instead, I focused on Figueres – only about from the French border -- even though I didn’t really know the place, thinking it was well situated and fitted much of my criteria.  I want to be further north where it is greener.  I already own rain boots and an umbrella.  From Figueres it is easy to visit Girona, , or the south of by train.  Soon it will have high speed train service to (not that I will have enough of a discretionary budget in the future to visit .  The existing train and bus service means I can easily take day outings to places that interest me and won’t have the expense of having to keep a car in the future.  Living in a city means I do can do my daily life by foot. 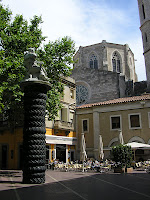 So this week I drove up to Figueres to see if the reality matched my expectations.  It did.  I found Figueres to be a pretty town, I found excellent restaurants that were not expensive (better and cheaper than anything around here), I found a town with cultural life, and I also found an apartment to make an offer on.  We have not yet signed a contract, so hopefully some good news about that next time.  Tune in next week!
Posted by Dvora at 8:41 PM