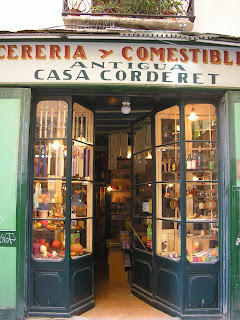 Manuel and I went to Tarragona today, he to pick up library books, and me to get my watch from the repair, buy some envelopes for the Christmas cards I made, and also to poke around the old town and maybe buy some soap and candles. I use church candles for commemorations, since I can’t get yarzheit ones here. Since it’s all the same God, I figure he doesn’t mind.

Tarragona has three main things going for it: the Rambla Nova, a big, plane tree lined boulevard that starts (or ends) at the cliff overlooking the sea, the promenade that goes along that cliff, and the old town that includes structures as old as ancient Rome.

I used to have a shop in the old town, just down from the Cathedral, and that was where we were headed. It is always nice to walk around that part of town, although since my shop failed, I still harbor a grudge against the shoppers of Tarragona. Maybe because of that I am always curious about shops that have opened and the ones that have closed down. I also like to say hi to some of the other merchants in the area who I used to know. One of them, the man who owns the nicest antique store in Tarragona is always friendly. He came to my opening, I bought a few things from him, and when I closed down I gave him my huge rolls of bubble wrap and wrapping paper. Then, last year when I was looking around for garden furniture, he gave me a hundred-year-old metal chair that used to sit on the Rambla Nova. In the old days they would keep chairs along the big boulevard and would charge you to sit. It was the same in Barcelona on Las Ramblas.

The candle shop is in a wonderful old space. It is always a pleasure to go in there, so I always look for an excuse. The only soap she had that was vaguely interesting was something made out of donkey milk which would have been interesting, but it was a bit expensive so I passed on that and just bought my four inexpensive candles.

Lunch was at the creperie at the Placa Pallol, the nicest little square in the city. The crepes are authentic and excellent.
Posted by Dvora at 8:27 PM