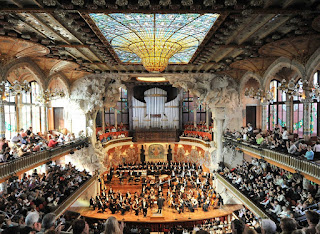 Catalan news these days is full of Felix Millet, the director of The Palau de la Musica, a historic and important Catalan institution. Millet and another person are thought to have embezzled (outright stolen, really), something like 23 million euros over a period of many years.

The Palau de la Musica isn’t just an ordinary concert hall. Declared an UNESCO World Heritage site in 1997, it is an artistic phantasmagoria made of mosaics, sculptures, stained glass, and iron, in which you pass into another, magical world. Built in 1905-08 it was designed by Lluis Domènech i Montaner, a Catalan architect of less renown than his contemporary Antoni Gaudi, who was perhaps less brilliant, but who nonetheless created some of the most beautiful modernist buildings in Barcelona, the Palau de la Musica and the Hospital de Sant Pau being the best examples.

The primary and original purpose of the Palau de la Musica was to house the Orfeo Català, the main chorus of Barcelona. In those days, this and other choral groups were becoming very popular in Catalunya. They were promoted as a means to keep the new workers of the industrial revolution occupied and out of the bars, much as did the YMCAs in the United States. Money for its construction was raised by private donations, and its first director was Lluis Millet, the grandfather of our modern crook.

It is coming out now that there were many suspicions about grandson Millet over a period of many, at least twenty years. But somehow none of them were fully investigated except for one where he was found guilty and spent a few months in jail. Amazingly, in spite of multiple suspicions in multiple venues, Millet was still appointed to the posts that he held at the Palau. The 23 million euros (or maybe more, it isn’t clear that the investigation has concluded) were taken from money that should have gone into the artistic programs, the chorus, the building. The main chorus is made up of unpaid volunteers; the Palau pays for their travel when they are on tour. Many of those tours had been cancelled in the last ten years because of supposed lack of funds, and sometimes rehearsal space was denied the chorus because the room was to be used for some other money-making activity. Money for whom?

Whereas this might sound like just another case of public fraud, here in Catalunya it is much more than that. The Palau de la Musica and the Orfeo Català are among the most important of Catalan institutions. Even I, as a newcomer here, feel that the Palau is a very special building and the chorus is a very special group. They represent the best of Catalunya and its identity. Art and music, more specifically the music of an ensemble, represents the group spirit that is prevalent in Catalunya while the Palau is treasured as an architectural jewel and center of Catalan cultural life. So a betrayal such as this, and not just by any functionary, but by the grandson of the founder, is a wound that goes very deep into the Catalan soul.
(Photo by courtesy of the Palau de la Musica)
Posted by Dvora at 6:58 PM