Catalans tell the E.U. to Wake Up

Today 45,000 Catalans went to demonstrate in Brussels.  Brussels is the capital of Europe, it’s where the European Union has its headquarters.

Forty-five thousand is a lot of people.  That was the count of the Brussels municipal police.  The Belgian federal police estimated the count at 60,000.  They travelled 1,346 kilometers (836 miles).  It takes 13 hours by car or bus from Barcelona.  Going by plane is faster but it costs more.  A round trip bus ride costs about 100 euros.  There were 250 chartered buses and many regular and chartered planes full of Catalans.  And many people went by car and a few even in motor homes. 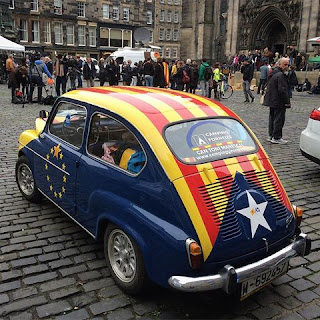 Although a few went a day or two early or stayed a day or two afterwards, most went only to spend the one day.  Those who went by charter bus left Wednesday afternoon to sleep on the bus and arrive in Brussels on Thursday morning.  The demonstration started at 11 am.  They got back on the same bus that afternoon to travel by night and return home the next morning.  To spend the few hundred euros to go by plane or to put up with the discomfort of traveling two nights in a row on a bus takes determination.  The Catalans who went to Brussels were determined.

Spain managed to convince the world that the referendum held on 1 October was illegal.  But there is nothing in Spanish law or the constitution that says so.  And if there were, there is the United Nations Charter of Human Rights, to which Spain is a signee, that says that all people have a right to self-determination.  So under international law, the referendum was perfectly legal.  Even so, the European Union has gone along with Spain to say that the referendum was illegal.  They also squirmed their way out of condemning the police violence on 1 October, which in any democratic context, is unacceptable, whether or not those going to vote were going to vote on a legal or illegal referendum.  Going to vote is not illegal and does not under any circumstances merit police batons hitting you on the head.

The 45,000 Catalans who descended on Brussels today did so for several reasons.  First of all they were there to show support for their democratically elected president who has not only been illegally removed from office by the Spanish government, but has also gone into exile to avoid charges of rebellion and sedition, among others, charges that stem from his having a different political viewpoint than the Spanish government has.

Different viewpoints are not allowed in Spain – in fact, the Spanish government says they are unconstitutional -- and there was evidence that fair treatment and a fair trial would not be forthcoming.  Those government officials who remained in Spain were all hauled off to jail immediately from their preliminary hearing, before any trial, and even before any investigation into the charges.  And they have been sitting in jail, without benefit of bail, for over a month, until a few days ago, six of them were released on bail, while four others remain in prison, the judge saying that their release could explode into violence.

Why suddenly worry about violence when there has never been any violence on the part of the Catalan independence movement?  Maybe the judge is worried about the Spanish fascists exploding into violence if the Catalans are released?  This could be a possibility since there has been violence at each and every one of the ultra-right fascist demonstrations.  But in that case, wouldn’t it be more just to imprison the fascists?

It turns out that Puigdemont’s going into exile to Belgium was a good move because when the Spanish issued an extradition order, expecting the Belgian judge to pack Puigdemont up and send him back, the judge didn’t do that.  He gave the accused (Puigdemont and four of his cabinet who are with him in Brussels) over a week to prepare a defense to the extradition charges.  The accused in Spain were given 24 hours to do the same before they were sent off to prison without bail from their preliminary hearing.  After the hearing he reserved two weeks for his own decision.  And before the date set for his decision, the Spanish suddenly withdrew their extradition order.  Why?  Because it seemed that the Belgian judge was not going to honor it and that would make the Spanish look bad.  What are charges of sedition and rebellion that carry 30 years prison terms in Spain, are not crimes at all in Belgium.  Spain’s fame as the home of the Inquisition lives on.

Besides showing support for President Puigdemont and his four ministers, the Catalans wanted to bring the issue of the lack of human and civil rights that they are suffering to the door of the European Union, the international organization that was founded on the priniciples of ensuring those rights and who are seen as failing their EU citizens who live in Catalonia.  They have had their legally elected government deposed and replaced by political leaders in Madrid for whom they did not vote.  They consider it a coup d’etat.  They have leaders in jail without bail before any trial.  They are in jail for their political beliefs and that is not something the EU should tolerate.

Each day Catalans' civil liberties are being curtailed.  One day they can’t hang yellow ribbons from government buildings, the next day city governments are instructed to remove any yellow ribbons that citizens tied anywhere they might appear throughout the city – park benches, bridges, lamp poles, balconies, or be charged with disobedience.

They can’t light their public fountains with yellow lights.  A group of seniors is prohibited from wearing yellow ribbons and scarves and demonstrating in front of their city hall in the town of Reus, demanding the release of the political prisoners in Madrid.  The right to demonstrate and protest is fundamental in a democracy, but Catalans are being prohibited from exercising those rights.  Catalans believe that if they want to wear yellow, they should be free to wear yellow.  Catalan media is prohibited from referring to President Puigdemont as “President Puigdemont” even though every ex-president is referred to in that way.  The media cannot say he and his ministers are in exile. 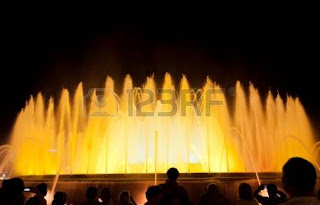 Initial reports I’ve read in the foreign (English-speaking) press say that the Catalans went to Brussels to ask the EU to support their move for independence.  But that isn’t so, not that they wouldn’t like that.  They went to Brussels to show support for their president who was illegally deposed, with the consent of the EU.  They went to Brussels because two leaders of their legitimate government, the government they elected, are in prison as are two grassroots leaders -- all of them imprisoned without trial for their political beliefs.  These are political prisoners and Europe should be concerned.  They went to Brussels to tell the EU that it should be ashamed for having abandoned its founding principles of human rights.  They have abandoned their citizens -- all Catalans are EU citizens -- to repression by the Spanish government.  Frans Timmermans, the European Commission Vice President, gave a short, cynical statement after the demonstration today that if the Catalans don’t like the Spanish constitution, they should set out to change it.  But Timmermans knows that Catalans are a minority in Spain, and a minority cannot change the constitution when the majority does not want to.  The Catalans went to Brussels to tell the E.U. to wake up.  That democracy is threatened in Spain by flagrant repression, and if democracy is threatened in Spain it is threatened in Europe.