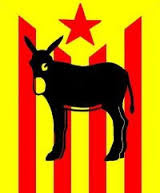 On 27 September 2015, early Catalan parliamentary elections were held.  Having been called by Artur Mas, the president of Catalunya, they were to serve as a plebiscite on the question of independence from Spain – a question to which the Spanish government did not want to hear the answer and thus would not allow a referendum.

For these elections, the conservative CIU party joined with the left-wing ERC to form a coalition that also included many people from non-political grassroots organizations that were interested in achieving independence.  This new coalition was called Junts pel Si (Together for Yes).

There was a third party, la CUP, which also supported independence.  But this is an anti-establishment, anti-capitalist party that did not want to align itself with the other two, particularly not with CIU.  So they ran as pro-independence on their own ticket.

The results of the September elections were hotly disputed for days.  Most of the dispute came from those parties who were anti-independence and who were determined to read the results as clearly on their side, proclaiming that independence had lost.  They included PP, C’s, and PSC (the socialists).  The final party Catalunya Si Que es Pot (a coalition of Podemos, the Greens, and another left-wing party) had not taken a stand on independence in their platform.

But there were those that argued that although these were parliamentary elections, the reason behind them was to offer citizens the referendum that Spain would not allow.  These elections were a plebiscite and should not be read strictly by which parties won but by how citizens voted on the issue at hand.  They said that independence had won.

In favor of the latter argument that independence had won was also the critical fact that the pro-independence parties now had a majority of the seats in the Catalan parliament.

In a matter of days, the new parliament elected its president (or speaker).  This was Carme Forcadell, the former leader of the grassroots organization Assemblea Nacional Catalana (ANC) who I wrote about in my last post.

This was quickly followed by the parliamentary declaration of the creation of the framework to start the transition towards the proclamation of the Catalan Republic. It also declared that “this Parliament and the process of democratic separation will not be subject to the decisions of the institutions of the Spanish state, and particularly of the Constitutional Court, which it considers to be delegitimitised and without competence.”

During this time the Spanish court brought charges against President Mas and two of his ministers for having arranged the informal citizen consultation – in lieu of a binding referendum or even a non-binding referendum, neither of which the Spanish government would allow -- in November 2014.  Mas and his ministers now face the possibility of being disqualified from holding public office or even imprisoned.

Everything was moving along until the time came to invest the new president.  CUP had said all through their campaign that they would not invest Artur Mas.  Now came the time for negotiations.  These negotiations lasted for three months.  Junts pel Si proposed and/or agreed to all manner of social welfare actions for the new government, but CUP still would not agree to invest Artur Mas.  They wanted someone else.  But Junts pel Si stood firm.  Their candidate was Artur Mas.

This made sense to a lot of people.  Artur Mas was the person who had led the Catalan government to this point in its move to achieve independence.  Independence had not been his idea, but he had been the one to pick up the gauntlet and lead the way.  He is now known internationally as the representative of Catalan independence, he is intelligent, quick witted, well spoken, multi-lingual, knowledgeable, and elegant.  He may not be a leftist or anti-system, but practically speaking, he is a good man for the job ahead.

CUP wouldn’t have it.  Mas was the one who had made cutbacks to Catalan spending during the last few years.  Never mind that Catalan funds come from the Spanish government as taxes are paid directly to Madrid.  Neither Mas nor anyone else could spend money they didn’t have in the budget.  CUP said that Mas was corrupt.  This is odd because although he is probably considered to be Public Enemy Number One in Madrid, they haven’t been able to drum up any corruption charge against him.  The only thing he is accused of is disobeying the Spanish court by allowing Catalans to vote – albeit in an informal consultation that had no legal consequence.  And by most standards, voting is considered a democratic process for finding out what citizens want.  But there have been corruption charges against others in his party, and evidently, for CUP it's a matter of guilt by association.

Although Junts pel Si won 1,628,714 votes and CUP won 337,794, CUP has been able to hold up the investiture while it negotiated, although this might be a misnomer, because to negotiate means give and take, compromise one thing in order to gain another.  All sorts of social welfare considerations were agreed to but CUP would never budge on the issue of voting for President Mas.  For CUP it was a matter of take what they could get, but give nothing.  Because except for their support of Mas for president, there was nothing else for them to give.

CUP wants social justice but they have been holding up the independence process for three months with the probable conclusion of going to elections again in March.  Slowing the process down or possibly ending it with a failure in March to get enough support for independence, how does CUP hope to achieve the social justice it is demanding?  It would make more sense to pave the way for a Catalana Republic where Catalan taxes would stay in Catalunya, the PP party would no longer have any power, and the social justice they seek would be possible.  For most people, that's the point of getting independence.

All along Junts pel Si said that Mas was their only candidate.  If he wasn’t to be invested, new elections would be held in March.  Many considered this would be an important blow to the independence movement.  For one thing, the independence politicians can’t agree on a basic political question, and for another, it will slow down the process.  Some voters are getting fed up.  Would independence win another election?  Has the movement lost steam?  No one knows and most would rather not take that risk.

Today, 3 January, CUP’s final decision was made.  They will not invest Artur Mas.  The assumption now is that there will be new elections in March.

But I’m not sure.  I suspect that Junts pel Si would prefer not to go that route.  Independence might not win again, it might be that people will have lost faith in their leadership.  It wouldn’t be easy to break away from Spain and harder yet if the political leaders can’t work together.  Many people are fed up, others are disillusioned or don’t think it’s possible.  The mandate may have been lost.

I think it possible that, having led the political way successfully this far, Artur Mas might not want to be remembered as the stumbling block to independence.  So it wouldn’t surprise me if tomorrow or the next day we get the news that he has decided to decline his candidacy in favor of someone else.  Although it isn't clear if he did so, who would be the one to take his place.

I had bet with a friend that Mas would be invested.  I lost that bet.  I won’t be betting on my new position.  I’ll just wait and see.
Posted by Dvora at 11:42 PM