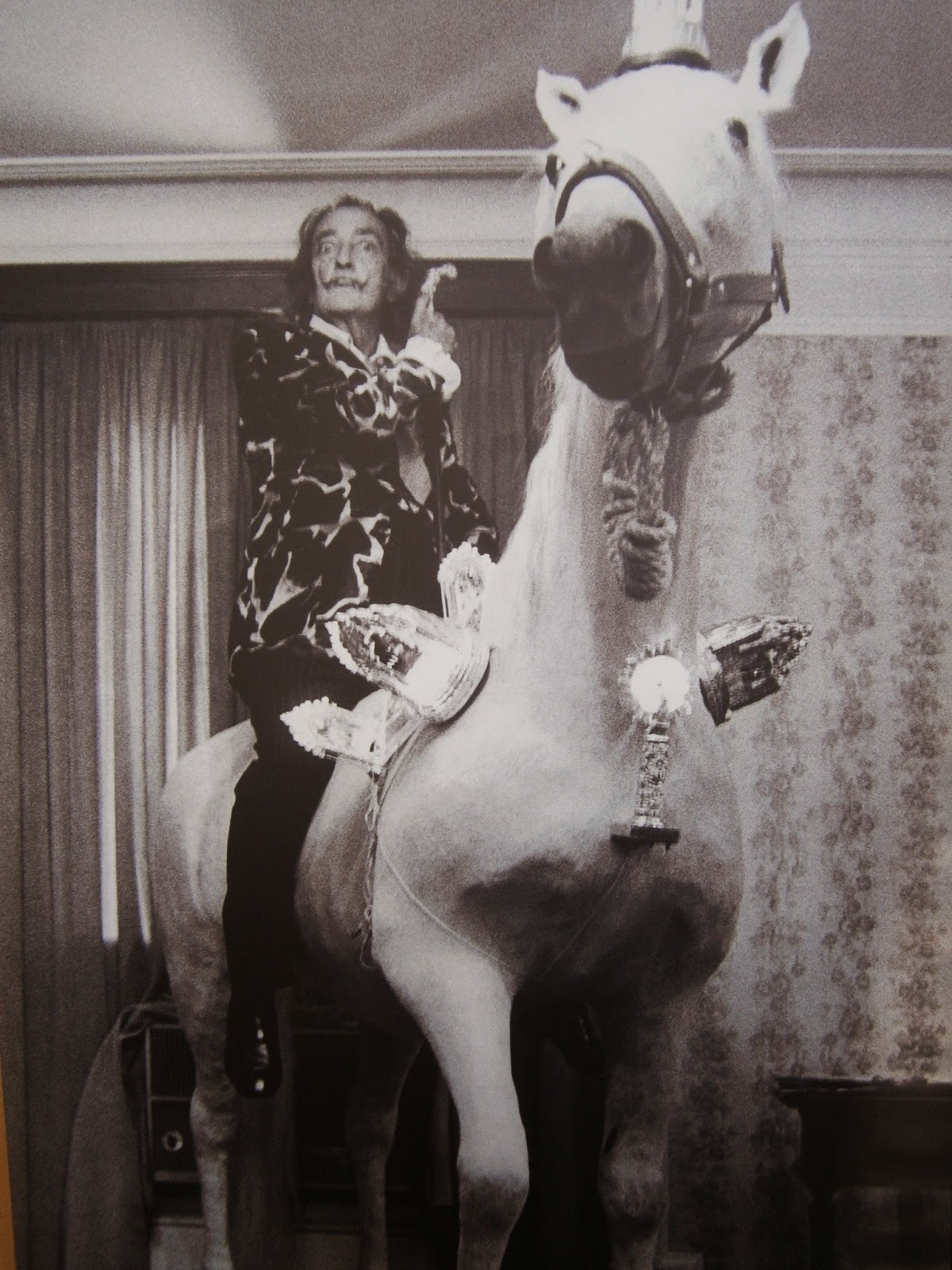 The Teatre-Museu Dalí in Figueres is one of the most-visited museums in Spain.  In the two years that I’ve lived in Figueres, I’ve never gone in.  I did see it once, many years ago during my first visit to Catalunya, when I came for a vacation with Manel.  I didn’t like it then.  I still remember having the sensation, after the visit, of having just experienced the world’s biggest ego.  I am not a fan of big egos.

When I took my first art history survey course in high school, I thought Salvador Dalí was cool and went so far as to buy myself a postcard of one of his paintings with the melting clocks – most likely The Persistence of Memory.  But my admiration didn’t last.  Genius and excellent draftsman he might be, but I don’t enjoy looking at his paintings.  Eventually my taste went to painters more interested in showing the beauty in the world than the ugliness, and later still, when I found out a little more about the man, I decided I didn’t like the person.

So you might wonder why it is that I recently joined the Friends of the Dalí Museums Association.  Acquaintances told me about it, and it seemed a reasonable way to avail myself of some cultural activity and stimulation.  The association puts on lectures and field trips, and you get unlimited access to the Figueres museum as well as his two properties on the Costa Brava.  The man was born and lived here, and I would never deny that he was a genius.  So why not get better acquainted with his work?

Dalí’s museum is housed in what once was the town’s theater.  Having been destroyed by fire, Dalí took it over and created his museum in the remains.  He designed every aspect of the new building and all the exhibits.  When I think of Dalí, I think of painting.  But he employed every possible means, and some impossible means, to express himself.

Last night the Friends of the Dalí Museum had a celebration.  This month marks the 40th anniversary of the opening of the Dalí Theatre-Museum in Figueres and the Friends were eager to mark the important day.  And clearly, it is important as it is virtually the only important tourist attraction that Figueres has to offer.

The celebration began at the Plaça de Les Palmeres where there was a photo exhibit related to the building and opening of the museum 40 years ago.  Nearby, in the old slaughter house/now cultural exhibit space, hangs another photo exhibit of Dalí.  These are historic photos from the Spanish press – one of which shows Walt Disney and his wife visiting Dalí and his wife Gala at their home on the Costa Brava. 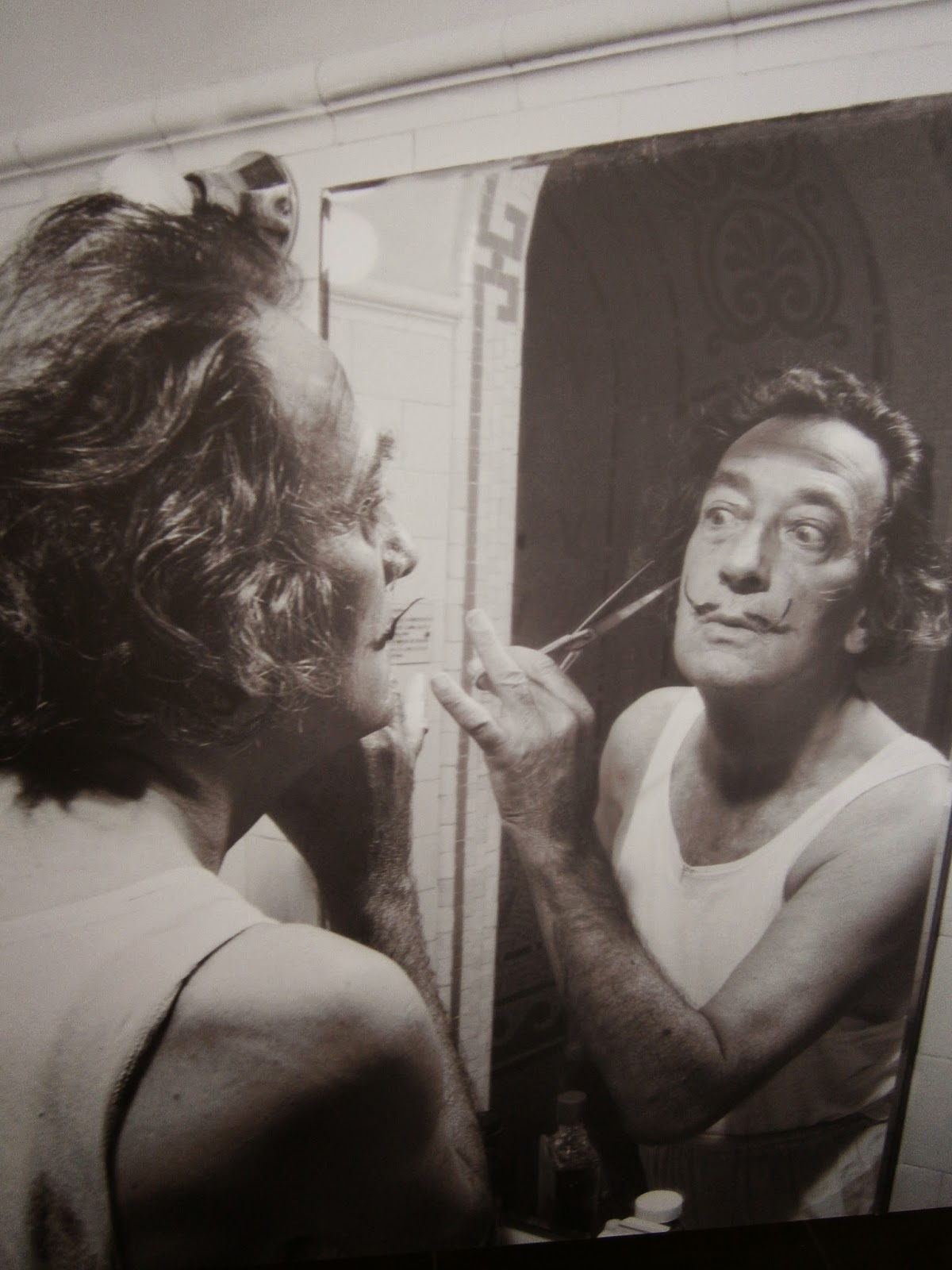 There were two speeches, some milling around, and then we all headed off, following the Salvador and Gala giants, assorted cap grossos (big heads) and a band of musicians, through the streets of Figueres, past terraces full of waving tourists, up to the Theatre-Museum. 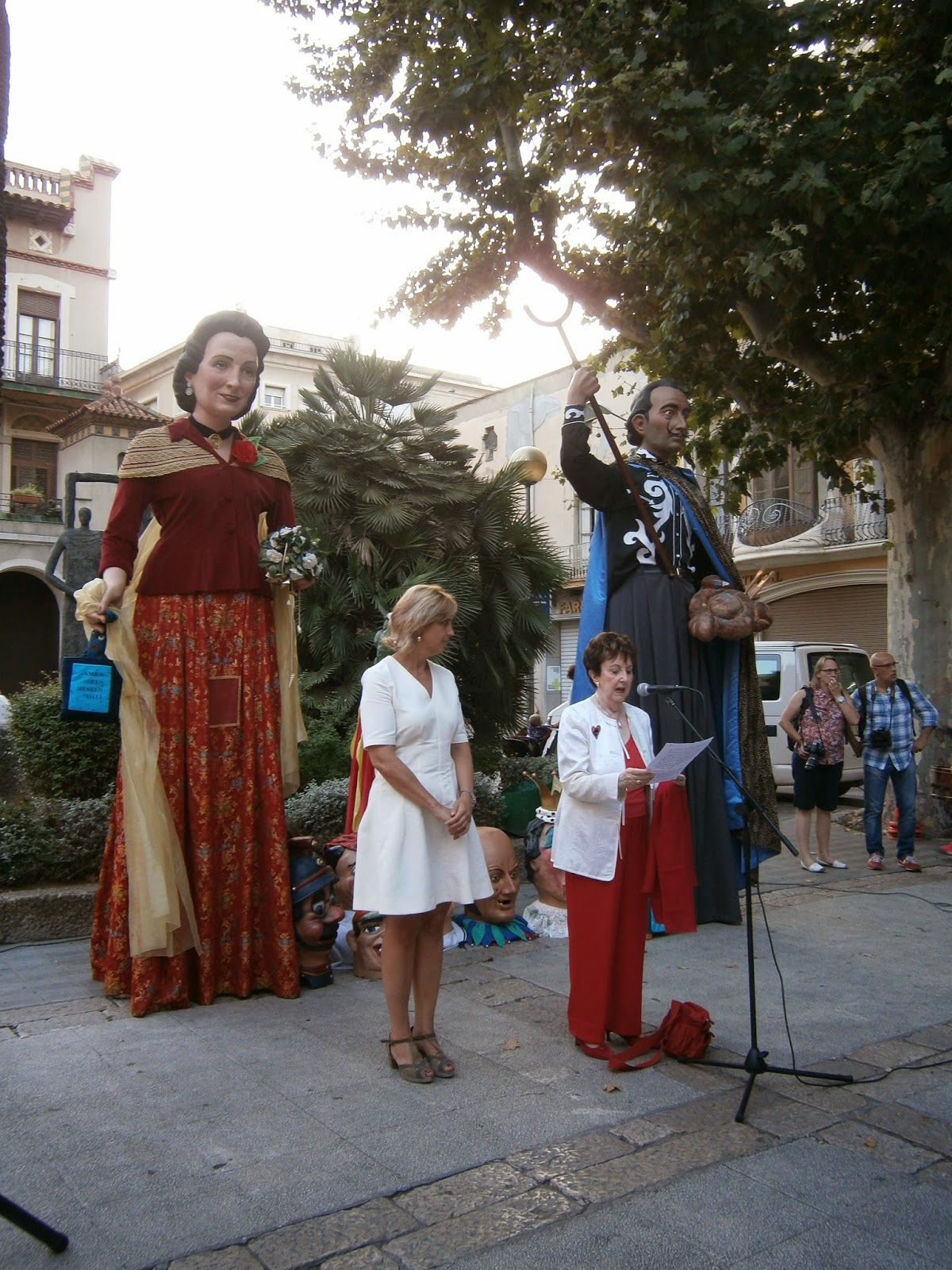 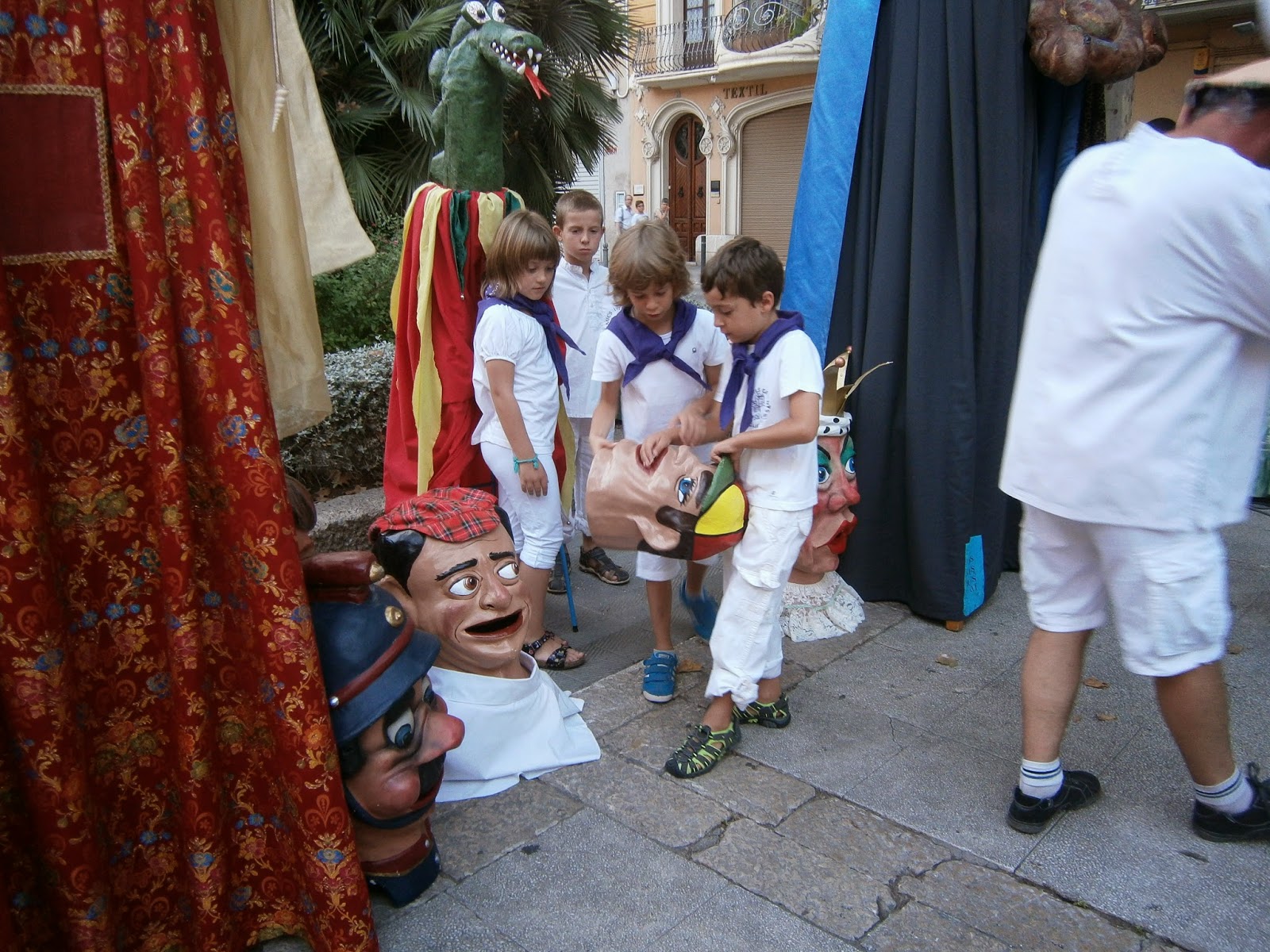 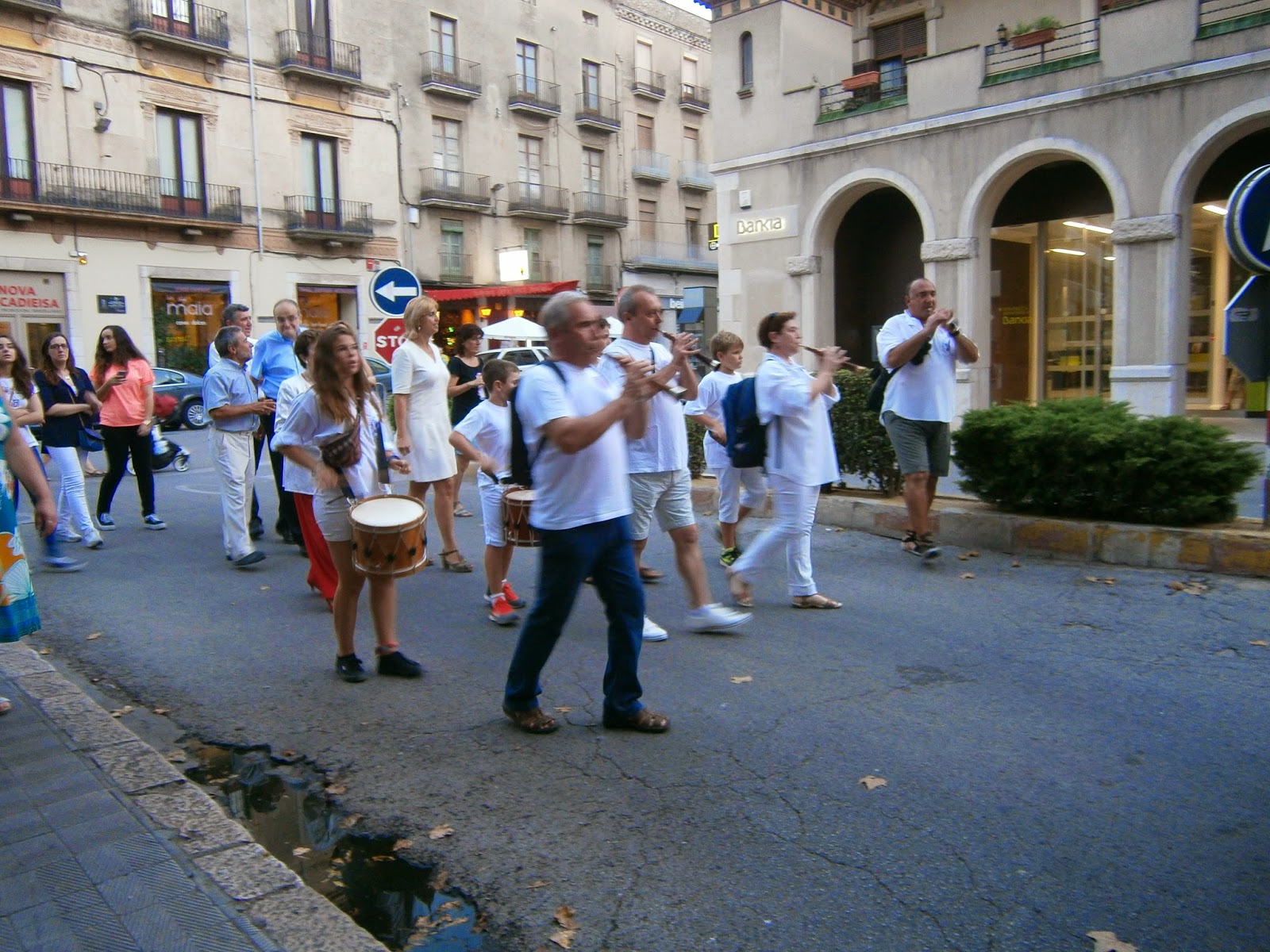 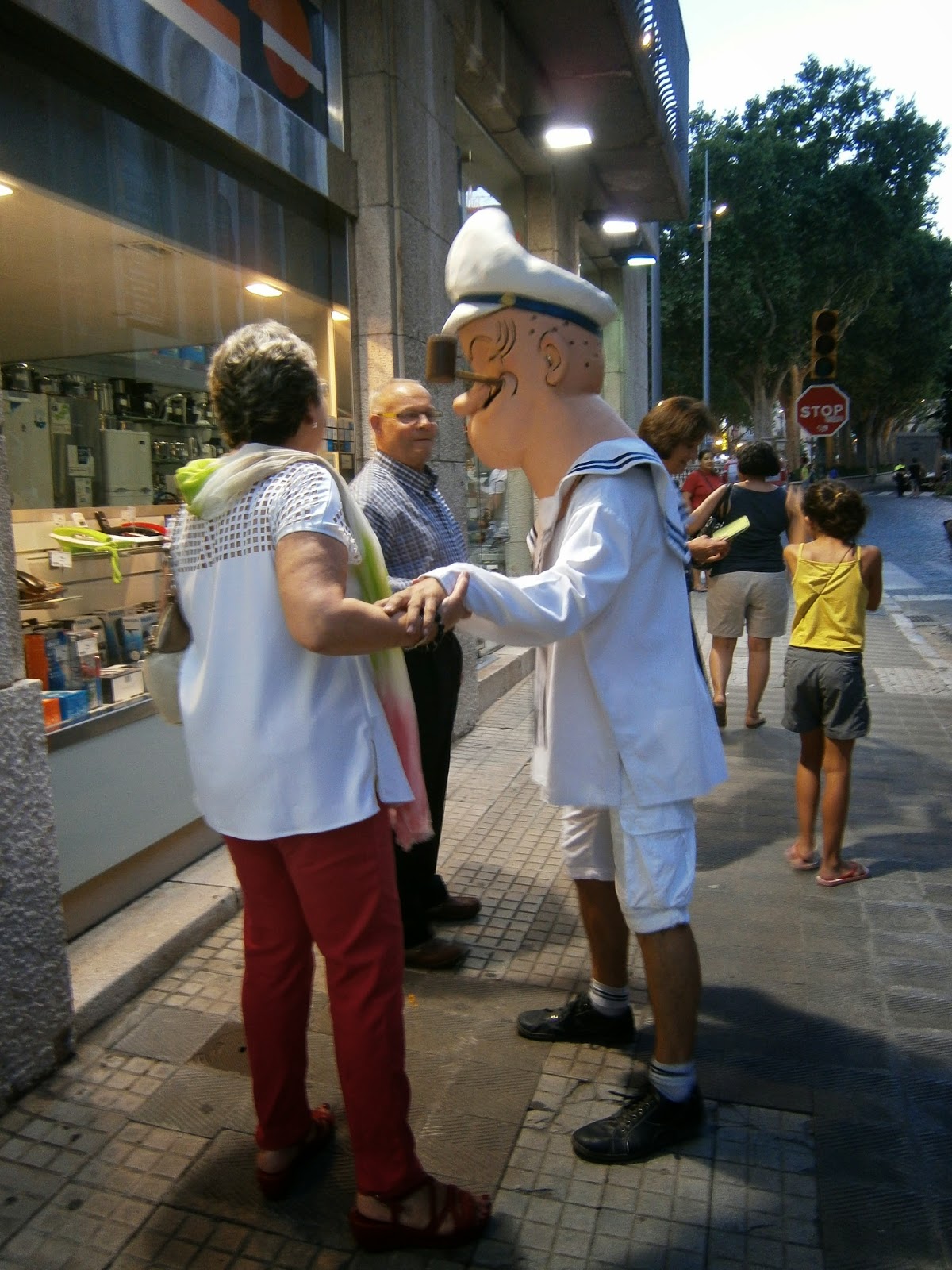 The main event was inside the museum, in the theater and consisted of a performance by Laia Vehí and her trio.  They had been introduced and when they came onto the stage, they offered no other introduction and started right in with the music.  It quickly dawned on me that Laia was not singing in Catalan – she was singing in English.  But somehow, I could only understand the odd word here or there.  Maybe it wasn’t English after all.

Eventually Laia did speak.  She is Catalan, she is a singer-songwriter, and her songs are exclusively in English.  She has a pleasant voice and sometimes uses it more as percussion than as melody.  This she does not in the manner of scat, but repeated blasts of a single syllable of the word that had just been sung.  Something like uhv-uhv-uhv-uhv, following the word love.

One doesn’t normally get to enter the Dalí museum at night, so, sitting there (without my camera) in that fantastic space surrounded by all the bizarre images and sculptures, it didn’t seem completely surprising that this young woman would be hammering out nonsensical English to a Catalan audience that didn’t understand a word.  In fact, at one point I came to the conclusion that she wasn’t so much singing as sculpting words.  In any case, while the singing took some getting used to, I thought the music – her guitar, the bass, and the drums, were wonderful.  Is this what surrealism is about?   I look forward to what else the Dalí Association has in store for me. 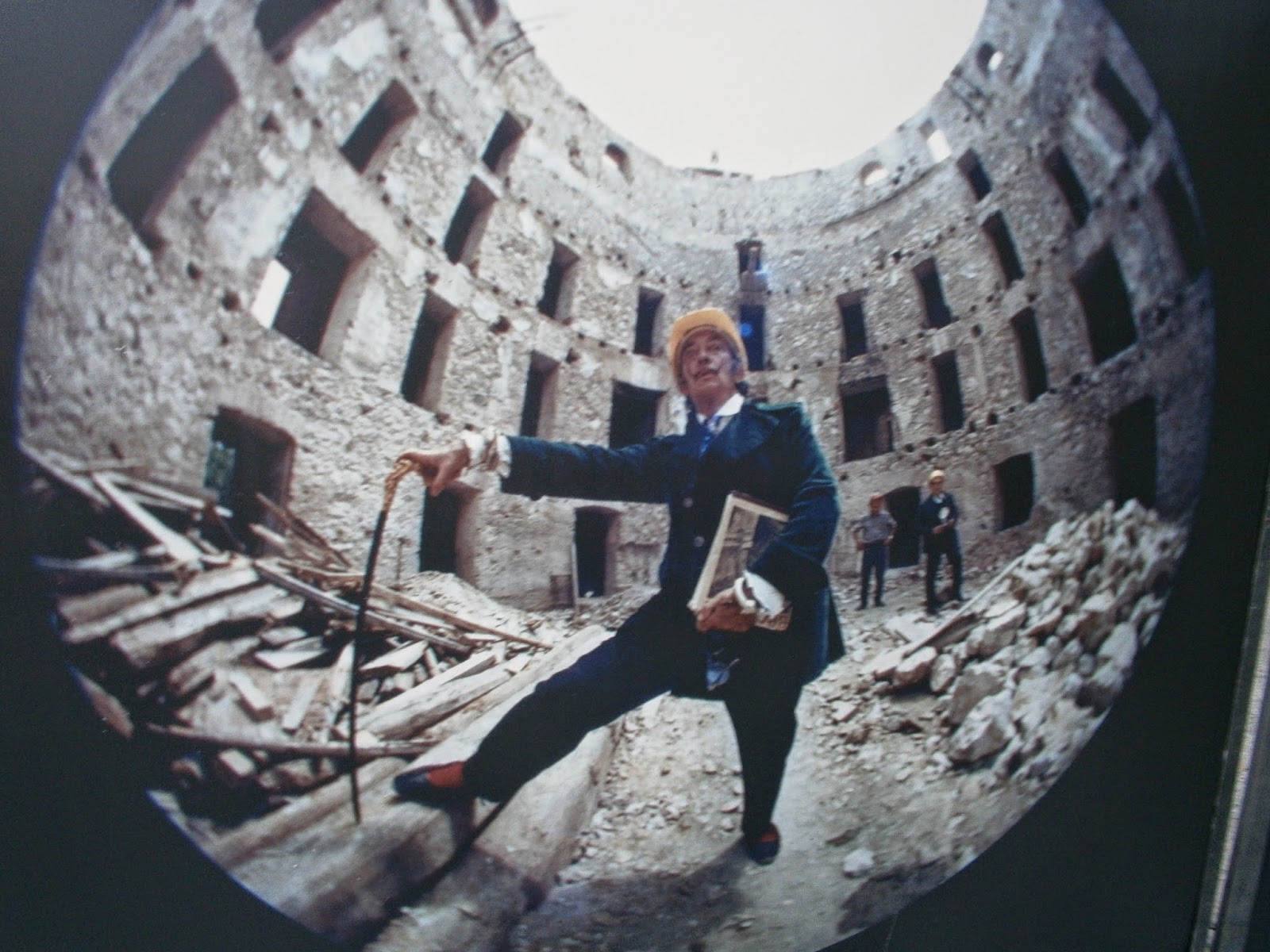