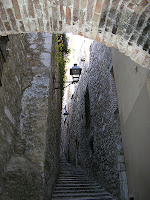 My yearly quest to find Chanuka candles is once again in motion here in Spain.  This is not like California where any supermarket will have them, sitting on the Kosher foods shelf next to the gefilte fish.  There are two places I know of that sell them in Barcelona (thanks Jaume for telling me about the second one, which is much more central than my original source).  But Barcelona is two hours away by train, I was there recently, and I’m not in the mood to travel there again so soon.


Girona, being only about 30 minutes away by train, seemed like a better possibility.  In medieval times, Girona’s Jewish community was an important center of Jewish mysticism.  I know that was a long time ago, and even though candles keep, I didn’t have medieval Chanuka candles in mind.


Girona has a Jewish Museum in the middle of the historic district.  This is what was, in the middle ages and before the Expulsion, the Jewish Ghetto, the area just bordering the Cathedral.  There is a museum and nearby shop that I remember from my visit there more than 12 years ago.  Surely the shop, that had lots of menorahs and chanukiot, would have the candles for them.  And while I was there I could visit the museum again.  I hardly remember it, except for the pretty patio and the feeling of being in a space rich with personal meaning.


The entrance to the museum didn’t look how nor was it located where I remembered it.  When I entered, the spacious reception area was empty except for the two young women sitting at the reception desk.  Neither looked up as I approached, although neither looked particular engrossed in anything either.  So I said “Bon Dia” and that caused one of them to raise her head.


When I had visited before, it wasn’t called a Jewish Museum, it was the Center Bonastuc Ça Porta.  Bonastuc Ça Porta is one name used to refer to the famous rabbi, philosopher, and cabbalist of Girona, Moisès ben Nahman, also known as Nachmanides.  I asked if this was the museum where the house of the famous rabbi used to be.  Apparently I had that all wrong.  This was the Jewish Museum, the young lady informed me.  It’s not a house, it’s a museum.  It seemed she didn’t suffer fools.


Numbering 300 at its peak, Girona wasn’t the largest Jewish community in Catalunya (it was Catalunya then, not Spain), Barcelona was bigger.  However, because of its rabbi, Moisès ben Nahman, who was such a significant figure in the world of Cabbala, Girona was in fact more important in the Jewish world than Barcelona.


Later, back at home, I found that the museum is located in the area where the synagogue and its related buildings used to be.  Maybe the famous rabbi, Moisès ben Nahman lived in one of those?  All I remembered was a patio with a Star of David.  I remember entering into the complex and seeing that patio.  I believe that now it is incorporated somewhere into the museum complex.


Clearly this woman was not interested in welcoming me into whatever there was on offer, rabbi’s house or not.  So I asked where the shop was and headed in there hoping to find more tolerance and, more importantly, candles.


The shop looked just as I remembered it, although the other time I had entered directly from the street.  It has a dark, old fashioned bookshop feel, overflowing with books, and other curiosities, among them, many menorahs and chanukiot.  I asked the man if he had any candles for the chanukiot.  No, he didn’t.  I asked if he could direct me to where I might buy some.  No, he had no idea.  Probably nowhere in Girona, he told me.  I don’t think it ever occurred to him that those decorations he was selling have a use and he clearly had no interest in what someone might do with the candelabras if they bought one.


At that point, I felt disgusted with this Jewish Museum that doesn’t welcome visitors and the Jewish Shop that doesn’t stock candles for the Chanukiot it sells.  It was time to move on.


So instead of exploring the Jewish history of Girona, I went instead to the CaixaForum, a public exhibition space owned and run by my bank.  Currently on show were mostly 19th century landscape paintings by a few Catalan painters and some of their French contemporaries, painters such as Monet, Pissarro, Sisley, and Gauguin.  The receptionist was pleasant, the exhibit was beautiful, the bathrooms worked, and the whole thing was free.  I also spent some time just walking around this lovely city.  I’ll go to the Jewish museum another time. 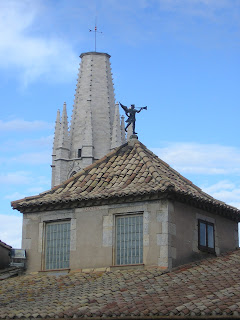