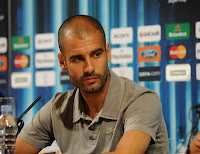 I’m in the middle of rearranging my life, moving soon into temporary quarters and waiting for the signing of papers at the notary to finalize the sale.  But I can wait to talk about that next week.  This week I have Pep on my mind.

One of the reasons I like Barça so much is that not only do they play beautifully (the fact is I don’t really appreciate soccer enough to know that – people tell me that).  Sometimes teams don’t play beautifully but they win.  Barça does both and that is to their credit.  And one of the things that is beautiful about the way they play is that they engage in a lot of teamwork, often setting each other up for a good shot, rather than trying to keep the ball for themselves to make the goal.  They also don’t act like vulgar celebrities.  Leo Messi, their most applauded player, is incredibly modest and humble for someone who everyone says is the best player in the world.

I think that Pep has a lot to do with all of that.  Since becoming the coach, Pep hasn’t been interested in using players who, although they may be good, are prima donnas.  He prefers to use and encourages players who are team players.  He has led the team to win tons of titles in the four years he has been coach and has won UEFA’s recognition as best trainer this year, but he remains as modest and humble as Messi.  In the face of allegations and insults (when they come, which is rare), he is always a gentleman.  At the press conference before a match even with one of the weakest teams in the Spanish League, inevitably Pep will give that team credit and say that the upcoming match will be a challenge.  I have never heard the man say a disrespectful word to or about anyone.

Pep, Messi, Xavi, and several of the other players are from Barça.  That is to say, they grew up with the team, being trained at the Masia, the BFC boarding school where youngsters, in addition to regular school work, learn to play good soccer and learn the age-old qualities of sportsmanship.  Pep, Messi and the others learned their lessons well.  It’s easy to be proud of this team.

I cried through the news story of Pep’s resignation this afternoon.  He says he is tired, spent, and needs to rest and recharge.  His second in charge, Tito Vilanova, will become the new coach.  Tito is also a product of Barça’s Masia and is on the same wave length as Pep.  But there is only one Pep: He’s talented, he’s honorable, he’s smart, and he’s cute.  Very cute.  There is already talk that he may be back again as coach, or maybe as President of Barça.  Until then, I know there are many like me who are going to miss him.  Adeu, Pep, fins aviat!

Thanks to Roxanne, Cule Extraordinaire, for providing the photo
Posted by Dvora at 9:23 PM