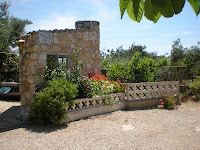 In the latest issue of the magazine published by my local city hall, there is an article about Mercadona, a big supermarket chain.  The headline says that Mercadona already has the permit to start construction.  The article goes on to say that they will begin construction in a few months time, here at our village.  In fact, this same week, they have signed the sales contract with the city hall for the land upon which this new supermarket will be built.
This land is mostly small parcels of olive orchards and a few carob trees bordering the small highway that leads into the village from the national highway and the toll motorway.  Some have small buildings on them and even the occasional house.
What the article does not say is that these parcels of land belong to several private individuals.  The L’Ametlla city hall has taken the land, sold it, and the owners have not received one cent in payment for it.  But they have been told that they can have other parcels, about a tenth the size of their present holdings in exchange.  These other smaller parcels will be limited as to their use.  In fact, there is a plan to urbanize those parcels so that the new owners will only be allowed to build the apartment buildings that are planned.  And they will have to pay about 200,000 – 300,000 euros each (depending on the size of their parcel) for the cost of the infrastructures and development.
A few of the owners have hired an attorney to help them fight this theft by local government.  They understand that when the time comes for them to have to pay the 200,000 euros – money they don’t have -- they will lose the land, and that will be the end of the story.  They have chosen to fight.
So far they have signed nothing.  It seems to me that if private property is going to be taken from them, then before any construction begins they should be paid fair market value for it.  Although to tell the truth, I don’t think it is acceptable for any government authority to take property that is privately owned unless it is for public services such as roads or railway lines.  But taking someone’s land so that a large corporation can build a supermarket doesn’t seem appropriate.  After all, we don’t live in a dictatorship or some third world country.
I happen to know the circumstances of this theft by city hall because Trini and her family are involved.  Trini runs the electric shop where I buy all my appliances and her brother Ramon installs and eventually repairs them if they break down.  The land belongs to their father, also named Ramon.  And when it comes to that, Ramon junior’s son is named Ramon, but they call him Ramonet. 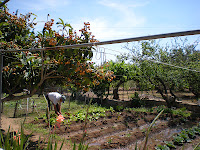 Ramon senior inherited the land in the 1970s from an aunt of his who left it to him because her own son had been killed in the Spanish Civil War, and that son, who was older than Ramon senior, was his godfather.  So this land has been in the family a long time and was an inheritance.  Ramon senior wants it to continue to be an inheritance.  He takes good care of it, he built a house on it with his own hands, he grows vegetables in his kitchen garden there, the family spends weekends and parts of the summer there, and he wants to be able to leave it to his children.  That seems perfectly reasonable to me.
If not for the fact that I know victims of this land deal, I would have thought it was a normal business venture.  I worry for my friends, for the anxiety and financial burden of the legal fight ahead that this is causing them.  Although there are a dozen or more owners who are losing their parcels, only five of them are putting up a fight and paying an attorney.  The rest seem to be shrugging their shoulders.  I hope those who are standing up for their rights end up victorious.  One of the perks of living in a democracy is that things like this are not supposed to happen.
I am pondering this as I read The Hare with Amber Eyes by Edmund de Waal.  This is a history of de Waal’s family -- a Jewish family made their fortune in and spread their business to and .  De Waal traces his family to their various outposts, through fin de siecle Paris then to Vienna until it was taken over by the Nazis and finally to Japan.  He does this by following the trail of a collection of netsuke – Japanese miniatures – that his great uncle Iggie left him when he died in 1994.
You may well wonder why I bring up this book that has nothing to do with the taking of olive groves in L’Ametlla de Mar.  But in fact, there is something in this book, something very upsetting, that reminds me of my friends’ predicament.  When the Nazis took over , they began systematically taking away all the wealth of its resident Jews.  This included their homes and all the contents, and their businesses.  De Waal writes, “All across this is happening.  Sometimes Jews are forced to sell things for next to nothing to raise money for the Reichsflucht tax in order to be permitted to leave.  Sometimes things are just taken.  Sometimes taken with violence, sometimes without…”
In L’Ametlla the act of just taking has nothing to do with anyone being Jewish; there are no Jews here.  But the taking is the same, and the catch-22 of having to pay a huge sum if you want to keep what belongs to you in the first place sounds familiar.
Good luck to Trini, Ramon, and Ramon.  It isn’t easy to beat city hall.

(Photos by Trini Gonzalez)
Posted by Dvora at 8:13 PM

Email ThisBlogThis!Share to TwitterShare to FacebookShare to Pinterest
Labels: land confiscation in Spain