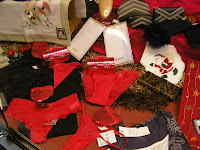 It is the custom for Catalans  – both men and women – to wear red underwear on New Year’s Eve.  In fact, it is done throughout and is supposed to bring good luck.  You should receive your underwear as a gift from someone, and you should only wear it once.  Ramon, my electrician, who doesn’t believe in God and is not superstitious, wears a pair that his wife gave him a few years ago.  Not being superstitious, tempting fate by reuse apparently doesn’t concern him.  No one I asked knew where this custom comes from, although they all say it is relatively modern and August thought it may have come from , which could be since they do it there also.  One American has it on his blog that it dates back to the Middle Ages when the church forbade people wearing the color red, it being the color of blood, the devil, and witchcraft.  But if that is so, no one here ever heard of it.  Anyway, I don’t think they had the wherewithal in the medieval ages to dye their underwear red. 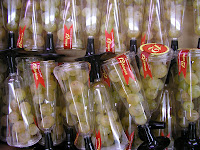 Another New Year’s Eve tradition here is eating twelve grapes at the twelve strokes of midnight.  I’ve tried that a few times and let me tell you, it isn’t easy to get them all down that quickly.  After my first try, I discovered that everyone else at the table had peeled and picked the seeds out of their grapes, so they at least had it easier than I did, all gagged up with my mouth full of pits and skins.  But in subsequent years, peeling and seeding still didn’t allow me to swallow all twelve grapes in time.  Try it sometime.  It’s supposed to bring good luck.
The grape tradition isn’t that old either, but people seem to have an idea of where it comes from.  Mostly they say that it started in when the grape-growers there had a bumper crop and unloaded grapes on the celebrating public.  Ramon thought it was the Italians that had a bumper crop one year and disposed of their grapes in .  But then somewhere I read that the tradition was actually documented as early as 1897, so maybe people don’t really know the origins after all.  Whatever the source of the tradition, it is well observed.  Grapes dominate the produce section of the supermarkets in the days before New Year.  You can buy whole bunches of them, or portions of twelve grapes in little packets dressed in cellophane, enclosed in plastic champagne flutes, or in small tin cans. 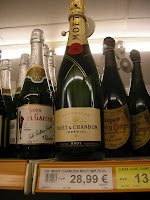 Of course everyone brings in the New Year with champagne, except that here they tend to drink Cava – the Spanish sparkling wine made, mostly in Catalunya, in the same way as the French but with a lower price tag.  Maybe it’s not as good, and then maybe it is just more reasonably priced.
Falling in with local customs, I have on a pair of red underpants that I had in my underwear drawer.  It wasn’t a gift; I had bought them for myself many years ago, when I was still living in .  Although it wasn’t a gift, they are new; I don’t think I have ever worn them.  I do that sometimes – buy something nice or a little special, and then save it for God-knows-what occasion.  Well the occasion for my underwear finally arrived today.  This will be my first time joining into the red underwear tradition.
For most of the other traditions, I have made some adjustments to fit my own quirks:  I will be drinking red wine (from the Terra Alta) which I prefer to Cava (or champagne), and instead of grapes I’ll be munching on bread with two different kinds of lovely goat cheese while watching a DVD of La Cage Aux Folles

(the original), my own personal New Year’s tradition – one sure to bring in the New Year with a good laugh.  And while like Ramon, I’m not superstitious either, I hope, in spite of the lack of grapes, my red underwear will be enough to bring me some good luck in 2011.
Happy New Year to everyone! 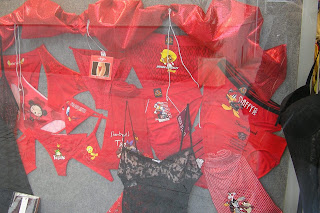